A Ditch in Time

Getting down the mountain after a long day’s walk it’s tempting to take the straightest route but I know it’ll be quicker to circle the hollow of blanket bog. We’ve got the odd pocket on our mountain, generally flat as a lake, and the soft squidginess in stark contrast to the unforgiving rocks and cliffs.  On the north Wales upland moors there are the odd pockets of rocks in an otherwise ocean of bog – wellington better than walking boots.
These bogs are born from water loving plants, such as sphagnum, growing and slowly decaying to form great depths of peat, as much as 9 metres. With a metre taking a thousand years to form, that’s a huge chunk of history laid down in date order. It’s also both a massive sponge for water and a vault for carbon.
Neither of these were understood or valued in the heady days of joining the Common Market when grants were made to drain the uplands in search of farm productivity. ‘For a while it was great. We and the sheep could easily walk on the ridges between the furrows. But then the trenches got deeper and, far from helping us, we were losing sheep, especially in the snow, trapped in a cell of peat’.
In places the floods of water have washed away vegetation and peat creating ditches that would swallow a double-decker bus. Across England and Wales it has been estimated that our degraded bogs are releasing 380,000 tonnes of carbon into the atmosphere each year, but if we can restore them, then each year, they’d lock up another 40,000 tonnes. A turnaround of 420,000* tonnes a year sounds a prize worth winning. If my calculations are correct, that’s just under 1% of the UK’s current emissions.
These good for nothing uplands were obvious targets for conifer plantations and, in with the tightly packed Sitka Spruce, went the ‘grips’, a strange term for ditches. Not only does the water escape through the grips, but by ‘transpiration’ – evaporation through the trees.
Forty years on and work is afoot to turn back the clock with plantations being felled and ditches blocked. On the day I visited there were 4 bright orange excavators at work and the foreman, from Dinsdale Moorland Services, reckoned they’d be there for 4 to 5 months. A scoop of vegetation covered peat would be placed to one side, then the walls of the ditch at the plug end cut straight, ready to receive great wadges of peat topped off with the scoop of vegetation. Roll forward 7 or 8 metres and build another dam wall – the steeper the hillside, the more frequent the dams.
The patchwork of dams is a bit of a minefield to walk on, best done in daylight, but in time the ponds will revert to boggy peat - teeming with insects and frogs at the base of a foodchain for wonderful creatures such as hen harriers and peregrine falcons. And when it rains the sphagnum and the peat will soak up the water and filter it, slowly releasing it back into the waterways and minimising the risk of flood damage.
Less floods, less carbon, less dead sheep, and more wildlife .... everyone a winner. 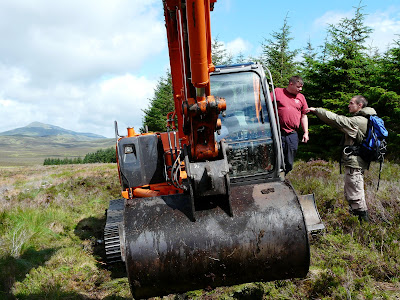