Visit to a Raven Roost

I’ve just got back from a visit to the raven roost in Newborough Forest on Anglesey; back in the 1990’s it was thought to hold about 2000 birds. The occasion today was a Cambrian Ornithological Society visit, guided by Nigel Brown who has carried out research here with others from Bangor University. We met at 2pm and walked slowly through the conifers, watching a big flock of tits and goldcrests moving through the branches.
After a while ravens in ones and twos began to fly overhead, and as we reached the roost area along the rocky ridge small groups of ravens were flying in all directions, making an astounding range of sounds. A peregrine appeared and gave great views; maybe it was after one of the jackdaws which were arriving along with parties of rooks. By now the ravens were settling in the trees as we sat quietly, taking in the spectacle and the cacophony of calls.
Tawny owls hooted close by as we started to walk back at dusk, and finally a woodcock flew low over our heads to round off a memorable visit.
Posted by Geoff Gibbs at 20:58 No comments:

Sandbanks provide natural defences, reducing coastal erosion, and behave in ever changing but predictable ways. Scientists can run models which will plot the size and location of sandbanks as sea levels rise in response to climate change and this is useful to inform planning decisions. The trouble is that sand and pure sandbanks are only part of the story – much of the sediment on earth is not sand but mud or a mix of mud and sand.


Where the sediment is sand you get a rippled effect and the length and height of the ripples reflects the flow and the amount of energy passing over that bit of the seabed. These patterns of sediment are called ‘bedforms’. Where the sediment is mud, or a mix with sand, the bedforms are much more flat and less mobile.

Sand is firm to walk on whilst mud is clawing and squelchy. Mud is sticky or cohesive whilst sand is non-cohesive. What makes mud so sticky is the volume of negatively charged particles of clay and the degree and types of excretion by many different creatures.
The £1m COHBED (COHesive BEDforms) project has been set up by NERC to fill the gap in our understanding, and improve our ability to model and plan for the future. Bangor University are 1 of the 5 universities working on the project.
If you’d like to know more about this project you should listen in to Radio Wales Country Focus, sometime in November, when Dr Jaco Baas will explain the finer points of ‘sticky stuff’.
Posted by Unknown at 19:23 No comments:

Edition 41 of Natur Cymru due out mid December will have a marine theme. Amongst the articles is a feature on Skomer and its sea slugs in particular. Here are some of the beautiful pictures we need to choose from. Turn up the volume to hear the soothing sounds of the sea and relaaaaaaxxxxxxx.

Coed Lleol – good for the mind, body and soul

It was a pleasure to meet up with Zena from Coed Lleol and learn about getting people out into the woods to improve their health. Would-be participants can’t just volunteer, they need to be referred by their GP. More information on the CoedLleol website or on the Radio Wales Country Focus programme, Sunday 30th October.
In the meantime here’s a great demonstration of brewing up a cuppa with a Kelly Kettle.
Posted by Huw Jenkins at 18:26 No comments:

The £35m Porthmadog bypass cuts through the flightpaths of a maternity roost of lesser horseshoes. Last July as many as 350 horseshoes were counted including the newly born.

One of the routes is along a hedgerow that is now about 5 metres above the newly excavated road and this is where the bridge spans the gap. Either side of the bridge is a solid 6 foot wall to shield the light averse bats from the beams of traffic passing below. Elsewhere the bypass has been built on an embankment and in these places culverts have been constructed along the lines of hedgerows to help the bats pass beneath the road without injury. In a couple of places these culverts are a massive 4 metres in height and width.

I was giving a talk to a local group and mentioned the bat bridge. There was much shaking of the heads about the expense but after the talk one member of the audience came up to say how pleased she was about the bridge. Something like ... ‘so much money is wasted on other things it’s good to see such a worthwhile investment. Wildlife teaches us lots of useful things and we should look after it.’

Opinion is obviously going to be divided. What do you think?

I’m not an expert but I think it was necessary to avoid significant losses of a scarce species. The inexorable growth of the human species (from 3 billion in 1960 to 7 billion in 2011) and its appetite for faster roads is not sustainable. Maybe we should have done without the bypass?


If you want to see what lesser horseshoes look like this is a short film of a hibernation count, under licence with the Gwynedd Bat Group, in the Vale of Ffestiniog. These might be some of the users of the maternity roost near the bypass.

In February 2011 there were 58 bats hibernating here which was just half the number of a year ago. This might have been due to the extreme cold weather combined with the exposed aspect of the adit resulting in the bats hibernating elsewhere. Hopefully we will see an increase in milder winters.

2nd weekend of October is walking weekend when friends from the south east come to enjoy or endure whatever the elements throw at us. One day was the Carneddau from Llyn Ogwen. Near the top of Pen yr Ole Wen we bumped into 6 other walkers and for a while followed them as they faded in and out of the clouds. Much later we heard a helicopter and the next day’s news included the rescue of 6 walkers stranded on a ledge overlooking Cwm Llafar. We saw no-one else all day - was it the same group? 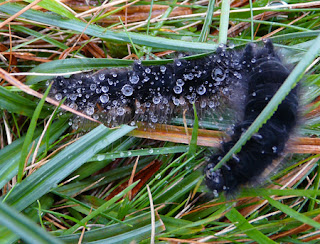 On the other day we did a cross over from Ganllwyd to Barmouth via Cwm Mynach and Diffwys. For most of the ridge walk we enjoyed the inside of fast moving cloud and the partial windshelter of stone walls. Heads down views of wet upland and lots of hairy brown and orange caterpillars (were these Fox Moth - Macrothylacia rubi?) with waterproof properties superior to Goretex.

But view of the day had to be the Mucilago crustacea slime mold. I won’t attempt any explanation of this but encourage you to read Natur Cymru edition 41 which will feature an article on slime molds written by Dr Bruce Ing (formerly of Mold!). He will also be describing them on the Radio Wales Country Focus programme in early November.
Posted by Unknown at 08:36 1 comment:

Natur Cymru back editions can be bought for £3 (subject to availability) but for new subscribers this is an expensive way to build a collection. We are therefore introducing a bulk purchase price of £1 per back edition subject to a minimum order of 5 editions inclusive of UK postage. This offer is open to subscribers only.

Email ThisBlogThis!Share to TwitterShare to FacebookShare to Pinterest
Labels: Natur Cymru Back Issues

On Sunday 9 October 2011 amateur artists are invited to join renowned Snowdonia artist Alison Bradley at Tŷ Hyll (the Ugly House) near Capel Curig for the 2011 Painters Challenge hosted by the Snowdonia Society.
Starting painting at 10.30am, artists will receive guidance and advice from Alison while creating a piece of work in any medium based on the theme 'nature'. Inspired by this beautiful setting, with five acres of garden and woodland and the Afon Llugwy nearby, artists have all day to create a masterpiece! At the end of the afternoon everyone will gather in Tŷ Hyll for refreshments, and Alison will award a £100 gallery voucher to the work of art she feels is most deserving. Two runners up will also receive an annual subscription to Natur Cymru magazine, which always features a unique piece of wildlife art on its front cover.
This is a unique opportunity for local artists to come together and be inspired by the woodlands and wildlife garden that our volunteers have worked so hard to create, as well as this iconic house. We hope to make this an annual event, celebrating and encouraging creativity in Snowdonia!
The event is being held with the generous support of Alison’s Gallery in Betws y Coed and Natur Cymru magazine.
Please contact Frances for more information on 01286 685498 or frances@snowdonia-society.org.uk, or visit our website www.snowdonia-society.org.uk.
Posted by Unknown at 11:53 No comments:

The sun shone on the righteous at the first ever NATUR fair at the National Trust’s Llanerchaeron. 4 miles inland from Aberaeron it was a beautiful setting. It’s a shame that more people didn’t attend but those that did were very appreciative.

A steady trickle of people made their way to the Natur Cymru stand including several past and hopefully future contributors. It was good to put the faces to the names. Overall it was an incredibly useful networking event.

Original works of art on the front covers of Natur Cymru are a distinctive and much appreciated feature of the magazine. The artists provide their work free of charge and in return we credit them on the inside page. 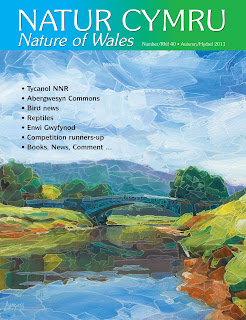 Autumn 2011 had a particularly good ‘cover story’ with a painting provided by Paul Burgess titled ‘Bridge Over the River Wye’. One of our subscribers from Pembrokeshire was so taken with it that they bought it for £450.
Happy subscriber, happy artist, happy ending.
Posted by Huw Jenkins at 09:43 No comments: