What’s New in the Forest of the Wolves? 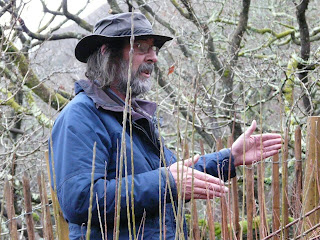 Mother Nature does most of the work but CCW wardens do their bit. Just recently there has been lots going on, including sprucing up of the willow wolf. 10 months old and it had grown a bit straggly so 4 of us set to, weaving the pliable strands back into the structure – what a barbershop quartet we could have made. The chestnut paling fence around the outside will remain in place for the coming year to protect it from goats until it becomes more established.

Speaking of goats ... the snow was heavier and hung around for longer than usual, squashing the undergrowth of bracken. This left young saplings standing proud and with little else to eat, the goats had a nibble or two.

On the positive side the double height fence, enclosing a section of the reserve close to the railway line, has been removed. For over 20 years the area has been free from grazing and the inevitable consequence, a profusion of brambles and ivy, is what the goats are feasting on at the moment.

Stands of trees, generally square in shape, like military formations, were planted 20 years ago and enclosed with wire netting. The fencing has all been removed and so too the Y shape funnel. This funnel was designed as a means for catching goats in the days when the local population was an unsustainable 50+. The idea was to lure the goats into the narrow funnel, with tasty strands of ivy and other delicacies hanging from the fence, then quickly close the door and transport them to Scotland. It didn’t work and now it has gone for recycling.

The ability to exclude sheep is vital to regeneration of the woods and the old perimeter fence posts are being replaced. Instead of those rounded, chemically treated, poles we are being re-fenced with cleaved, sweet chestnut.

In the really good old days dry stone walls would have been the stockproof barrier. Sustainable and enduring they will last indefinitely, provided there is some maintenance. Sadly one of the most impressive stretches of wall was breached by a fallen tree. My neighbour in the farm below says this stretch, which rises steeply from the mouth of the waterfall, was built by 2 brothers competing against each other.  Thanks to CCW the tree has been chopped and the wall rebuilt by a local master craftsman.

He’s not going to be so local in future, next month he goes West with a renewable 1 year visa to work on America’s stone walls as part of an initiative to re-introduce the craft. He’ll start in Kentucky before moving to Dallas and will employ a US citizen to work with him.

Finally for those who don’t enjoy the indignity of stiles the good news is that kissing gates have been installed on the top path heading out of Coed y Bleiddiau towards Dduallt and below by the waterfall at the hairpin bend.

To see a short film of what's been going on, click here. 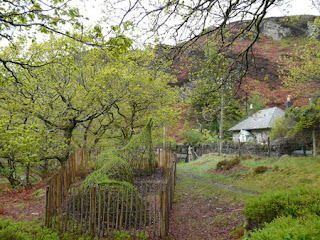 ‘Wolf!’ he cried. ‘Wolf!’ and there it was, a huge wolf in Coed y Bleiddiau, the ‘forest of the wolves’. Full of life and vigour, with its jaws open, howling up at the sky. Nothing but a skimpy picket fence to hold it back and 400 sets of roots. This was a willow wolf in the Vale of Ffestiniog.
Local legend says here was home to the last wolf in Wales, hence the name of this oak woodland is Coed y Bleiddiau. On the other side of the valley is Cae’r Blaidd or ‘field of the wolf’. Just across the mountains is Beddgelert, the ‘grave of Gelert’, the dog that saved the son of Llewelyn the Great from a wolf attack (or so they say).
Wolves became extinct in England in the early 1600s but lived on in the wilds of Wales for much longer. They were probably still around during the Civil War and there is talk of a Knight’s Grave nearby, maybe he slew the last wolf? Or was he a victim?
This wolf has every chance of living forever, a vigorous type of willow (salix viminalis) planted in March 2010. It’s been sited by the path that runs parallel with the Ffestiniog Railway, in a small clearing, away from overhanging trees which would block the sun and inhibit growth.
10 months on and our wolf was looking a bit shaggy. Instead of taking pruners or shears to it we twisted the new growth back into the framework. We had meant to do this in December but feared the willow would have been frozen brittle and snapped. Click here to see the willow wolf having its winter spruce.
Previous residents of note at the derelict cottage, the other side of the railway track, include St John Philby, father of Kim Philby, the infamous spy. His house guest at the outbreak of WWII was William Joyce who travelled from here via London to Berlin where he became known as Lord Haw-Haw, the propaganda broadcaster, subsequently executed for treason.
The wolf was funded by the Countryside Council for Wales (CCW), designed and built by Beryl Smith of Llanidloes (www.craftsmidwales.co.uk) with a little help from CCW wardens and volunteers.
Posted by Huw Jenkins at 08:53 No comments: