Teifi Marshes: a small butterfly, a big badger and some buffaloes!

Nathan Walton wrote about the Teifi Marshes reserve (Wildlife Trust of S & W Wales) and the Welsh Wildlife Centre there, in the Spring 2015 issue of Natur Cymru. Kate and I arranged to meet Nathan at the reserve on our way down to Skokholm in early September; as his first job in conservation was with NWWT there is always plenty to talk about!

The small butterfly is the brown hairstreak, one of five British hairstreaks. It has quite a limited range in Britain, but SW Wales is a hot-spot for them. The females lay eggs on blackthorn, avoiding hedges which are cut every year with a flail. We knew it was the right time of year and asked Nathan if we could see one; ‘Yes, on hemp agrimony outside the kingfisher hide’! Ten minutes later local entomologist Maggie Sproule was showing us our first-ever brown hairstreak. Maggie told us: ‘It has been a wonderful year for sightings at the Wildlife Centre, helped by the fact that so many are nectar feeding.  One day I was watching a female and waited to see how she would stay nectar feeding.  I first saw her at 14:00 on a hemp agrimony plant and kept checking every ten minutes.  She was still there, on the same plant but a different head over two hours later, and didn't leave until the plants were in the shade’.

After this experience we sat outside the Centre with a cup of tea and a bun, and enjoyed the view over the Teifi Marshes towards Cardigan town. The big willow badger certainly dwarfs the small boy!

On our walk round the 2-mile Wetland Trail we enjoyed seeing a group of water buffaloes. Nathan told us ‘we had eight females on site that arrived middle of March. Six of them were pregnant although it wasn’t clear as to when they would ‘drop’. Due to good herbage on the reserve, they developed quicker than anticipated and the first female gave birth in the middle of August.


It was decided to take them all off the reserve so as to allow birthing within farm buildings of the owner. The female and calf along with three others were easily rounded up. The other four were new to the reserve and so herding them into the pen was not so easy. They were extremely nervous and charged whenever we got near. Over a few days we managed to get them towards the holding pen by creating smaller compartments that were electrified and then shutting them in. They finally came off the reserve on 14th September after passing their TB test. They will be back next season and have done a fantastic job this year on the reserve, keeping vegetation managed and water areas open’.

The Teifi Marshes reserve and the Centre are readily accessible on foot or by bike from Cardigan over the old bridge; the Centre is reached by car via Cilgerran village. 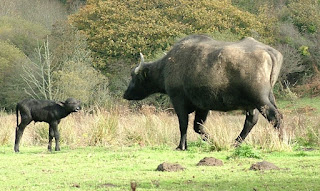 Spoilt rotten – the wonders of colliery spoil tips ● Liam Olds. The invertebrate wildlife of these rich and often overlooked habitats.

Weaving the web: towards a natural garden ● Malcolm Berry. A new approach to growing food and benefiting garden wildlife.

Dartford Warblers in south Wales ● Hannah Meinertzhagen. A study of the habitat types favoured by this new colonist of the Gower Peninsula.

From the Garden ● Bruce Langridge. A Welsh mycological revival
Posted by Anonymous at 12:38 No comments: