The wolf is free! 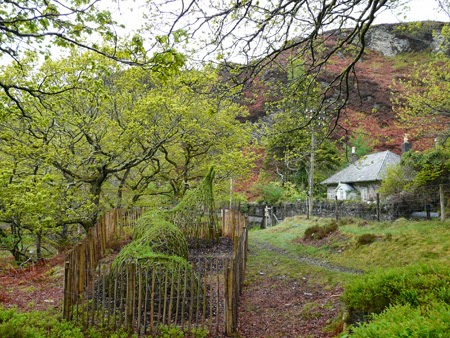 For four years the willow wolf in Coed y Bleiddiau has been imprisoned within a picket fence. It was for his own good really, to keep hungry goats away. But now he’s a fully grown, mature wolf, strong enough to withstand a bit of bark nibbling, so the wardens have removed part of the fence in order that children (adults too) can crawl into his stomach and exit through the oversized tail.

Not everyone recognises our beautiful sculpture as a wolf, some just don’t get the howling jaws pointing up to the skies. But from today people with smartphones and a barcode scanner can find out all about it via a pair of QR codes. The top code gives a snippet of information direct from the code to the phone and the bottom code gives much more information via a link to the website historypoints.org 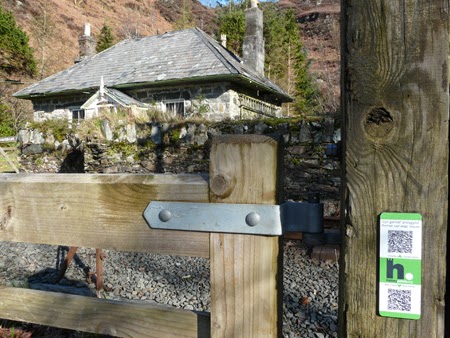 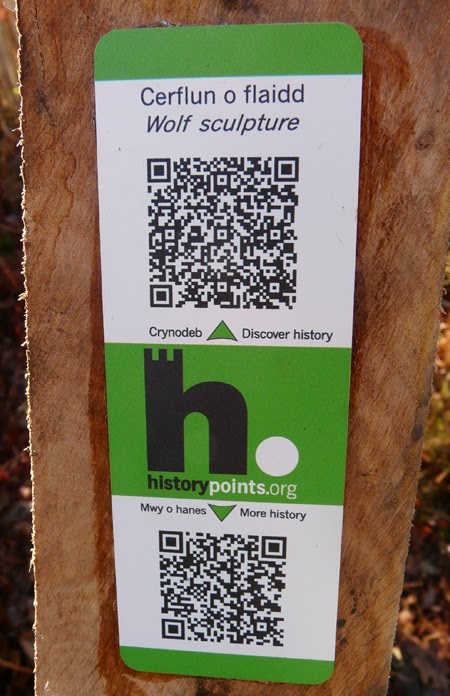 Across from the wolf is the old Railway Inspector’s cottage which many people stop to admire but few know much about its colourful history. All can now be revealed on the QR code.

These are just two of the many ‘history points’ to be found along the edge of the Ffestiniog Railway and are part of the 750 history locations across Wales. I asked Rhodri Clark how he chose the name for the website and the project. ‘Everyone’s familiar with cash points, history points is the same but dispensing history.’

This is a really good and unobtrusive way to signpost the countryside in an unobtrusive way. You can get lots of information which is easy to update and translate into multiple languages; so much more flexible and enduring than an interpretation board, much cheaper too. Well done Rhodri and everyone who contributes to creating historypoints.org
Posted by Unknown at 19:50 No comments:

After a brief introduction to rocks we headed out of the quarry near Gelli Iago, on the short cut road from Llanfrothen to Nant Gwynant. Our guide Clive Hudson, with long wooden staff in hand, looked a bit like Gandalf but without the beard.

His staff was not for conjuring up spirits or smiting rocks – this staff would help indicate the angle at which rocks dipped into the earth and another gadget was used to measure the angle of dip. At the start of our walk they were all dipping towards the south east and later on to the north west which meant we were walking through a basin – strong forces had squidged the rocks into a U shaped fold.

We walked over slate, crossed a slither of sandstone (and a bit of yellow tuff / volcanic ash) and were introduced to a dolerite intrusion; magma at high temperature and under high pressure, which had been squeezed between sedimentary rock and solidified slowly, deep underground. This rock has no slaty cleavage, tends to be blocky (breaking up into blocks) and covered in vegetation such as lichens.

Dolerite was butted up against sandstone and, whereas in the past I would have called them all rocks, I like to think that I could now tell the difference. Sandstone is built from layers of sediment accumulating underwater and this was obvious to see with larger granules in places, where stronger currents had carried heavier bits. On the face of some rocks we could see the ripple effect, with heavier granules on the ridges and finer sediments in the troughs.

This area is obviously a well used outdoor classroom; every now and again we would notice a chipped off piece of rock where budding geologists had taken a sample. Newly exposed rock is a very different colour to the weathered rock.

Along the way through the basin, Clive turned over a rock to illustrate some fossils. Nothing with great jaws, wings or long tails but a few tiny, finger nail shaped hollows formed by seashells. Upside down (round side on top) shells are less likely to be dislodged by moving water so we could assume which way up this boulder had been created. As we got closer to Llyn Llagi we found what we were looking for, the dolerite rocks coming up at the far side of the basin.

From the shores of Llyn Llagi we stood on a hollow-sounding structure of slate in the middle of a bog which we surmised to be a platform for drying peat. But who wanted the peat up here? It was handy to have Kathy Laws in our party, the archaeologist from the National Trust, to point out the site of an iron-age settlement just a hundred metres or so away – maybe they would have needed a supply of peat.

The buoys in Llyn Llagi are part of the monitoring of this and 20 other lakes in Britain to measure acidity. Since 1988 the acidity of Llyn Llagi has fallen with PH rising from about 5.3 to about 5.9 – the main factor being the reduction of acid rain caused by sulphur dioxide from coal-fired power stations. The other lake monitored in Snowdonia is Llyn Cwm Mynach. 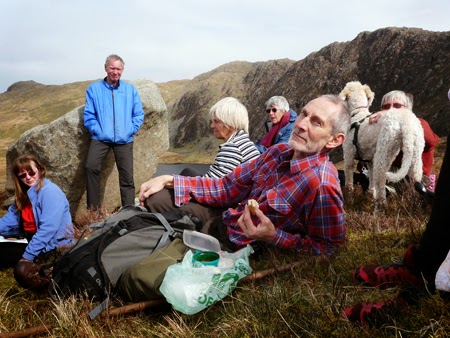 From here we walked to the top of a microgranite sill to eat our lunch beside a dolerite erratic. I’m not sure I could identify microgranite – it’s like dolerite but formed with the addition of quartz. On a sunny day it made for a great picnic site.

Our last mission was to climb to the top of Castell, a rhyolite intrusion - a ‘volcanic plug’. Clive explained the different viscosity of lava (which is magma that has broken through the earth’s surface). Volcanoes erupting on, or close to the edges of continents have sticky lava whereas in the open seas they have thin, fast flowing lava, which is why Hawaii is the shape it is. When lava spewed out of Castell it was the sticky stuff that stayed upright and slowly moulded over time. The rhyolite was a light, whitish colour with lots of fragments solidified in wavy bands.

It was a wonderful day led by Clive and organised by the Snowdonia Society. I feel I know a lot more than when I started but the number of questions buzzing around my mind makes me realise the extent of my ignorance on this fascinating subject.

Clive Hudson is an enthusiast for local pre-history and maybe organising a day school to look into subjects such as: flint technology and lime bast string and other cordage. Another possibility is the extraction of birch bark tar which was the glue to stick flint onto shafts; Clive’s prototype involves a biscuit tin and a baked bean tin in a fire! If you would like to know more or take part in an interesting day please contact Clive at cliveshan2@gmail.com