Young bracken can be slashed or strimmed but the trunks of mature plants are too tough. By mid August they’re falling over and lying at odd angles. This is when an alpine scythe comes into good effect. Swinging from right to left in a slow hoola hoop motion, slicing through a dozen plants at a time and pulling them to the side.  It takes about 10 minutes to work up a sweat and within an hour I’ve not got a care in the world.
My target this year is the acre or so of open ground at the edge of the Maentwrog Nature Reserve that backs onto our vegetable garden. It has an expansive but short lived spell of bluebell brilliance until it gets swamped by lime green bracken. Last year’s experiment to clear a small patch proved worthwhile, this year I’m going for the lot (with the blessing of the warden).
Surveying my work in progress from the bedroom window I spotted a fox as it came out of the trees and started to cross the mown patch to the garden. A quick call from my mobile to the landline downstairs to alert the rest of my family.  We all watched as it climbed onto and walked along the stone wall then disappeared into the clump of damson trees.  That explained the purple scat at the corner of the garden.
After a few minutes of damsons it picked up a windfall Victoria plum before exiting stage right. Upside down livestock fencing is no barrier at all, not even a wriggle as it nimbly passed through.
The following night I put up a trail camera next to the damsons. Sure enough the fox was back. If you look carefully enough you can see the fox being startled by an owl flying off a post.
Posted by Unknown at 07:25 No comments:

Butterflies in our Llanfairfechan garden 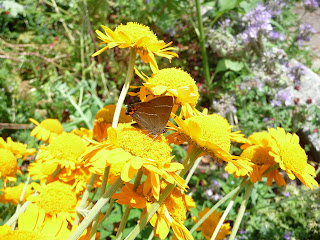 Rather poor this year. The buddleias are fully out but today all we've got is 2 Large Whites, 2 Commas, a Red Admiral and a Peacock. One Painted Lady has put in an appearance and a Hummingbird Hawkmoth was a regular visitor in July but has now departed.

We have had one new species for the garden - a Grayling on July 24th. We see these on the rocky heathland on the edge of the Penmaenmawr quarry, not far as the crow (or chough) flies but 200m higher up than our garden at 100m.

Last year we had a few more exciting species in the garden, including a Small Pearl-bordered Fritillary and a White-letter Hairstreak (see photo). The former is a fast flier which could have come some distance from the nearest colony (wherever that is), while the Hairstreak is unlikely to have flown further than the elm trees across the road - elm is the food plant for this species. The white-letter is the W on the closed wings (hairstreaks at rest always have their wings closed).

We also record butterflies up the road, through Nant y Coed (our local Nature Reserve) and out onto rough grazing above. We do these weekly transects from April to September for Butterfly Conservation. The most exciting sighting this year has been a Dark Green Fritillary, a larger and even faster flier than the Small P-b species. On the debit side, I have failed to spot another species of hairstreak - the Purple, which lays eggs on oak leaves and also visits ash trees to feed on aphid honeydew. In previous years we've always seen these in July and August, but so far in 2011 not even a flash of purple.

Returning from a rare excursion to the south of London I left the train at Vauxhall. Instead of catching the tube to Euston I walked past MI6 headquarters to the cycle rank beside the river- a line of about 30 identical bikes with a vending machine at the end. 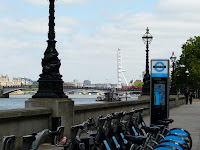 In went my Visa card and, after pressing buttons to select options, out came a ticket with a 5 digit code. I typed the code into the docking bay for one of the bikes and, after a strong yank on the handlebars, it was time to tuck my trouser leg into my sock and start pedalling.

Along the wide terrace of the south side of the river, beneath Lambeth Bridge, past signs which said ‘considerate cyclists welcome’, then across Westminster Bridge onto The Embankment. Left up Northumberland Avenue, through Admiralty Arch into The Mall. What joy!

I stopped at a stand where a firm called Spencer Ivy were offering test rides of their electric bicycles. Lightweight and with a range of 50 miles between charges they were impressive but at £1,800 I had to say ‘I’ll think about it’. They’d certainly make Snowdonia an easier touring option.

The company has a partnership with a cycle tour operator in the Brecon Beacons called Drover Holidays promoting ‘Electric Wales – cycling holidays with added power’.

Onwards into Green Park until I noticed the no cycling signs and pushed my way out to Hyde Park and resumed pedal power to Speakers Corner. Through the West End, left at Centrepoint and northwards to Euston. 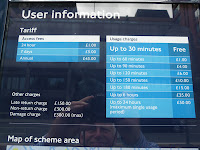 What a brilliant way to travel especially on the dry and sunny Sunday that it was. My 2 hour adventure had cost £7. The bikes are emblazoned with ‘Barclays’ but everyone calls them Boris’s Bikes (as in Johnson the mayor) which is a bit unfair as it was in fact Ken Livingstone’s idea.
Posted by Huw Jenkins at 10:45 No comments: