Ffridd for the Future – sabre planting at Dyffryn Mymbyr

Dyffryn Mymbyr is the hill farm immortalised in ‘I Bought a Mountain’, the Thomas Firbank book published 75 years ago and reprinted countless times. It’s a page-turner telling the story of Firbank buying the farm in 1931, along with thousands of sheep, and making a go of it, despite being a novice born in Canada.

A central character in the book and pillar of strength is Esmé, who he met and married a couple of years later. They went their separate ways during the war and afterwards Firbank gave the farm to Esmé where she lived with her new partner Peter Kirby. She went on to found the Snowdonia Society, and much later the Esmé Kirby Snowdonia Trust, campaigning relentlessly to prevent inappropriate developments spoiling the natural beauty of Snowdonia. After their deaths the farm was acquired by the National Trust in 2005 and since 2010 its two farmhouses have been let to people on a self-catering basis.

Recent guests at the one farmhouse were a party of volunteers ‘sabre planting’ trees into the ffridd; that’s the steep hillside beneath the mountain wall above and the improved land beyond the road below. Sabre planting? The hills are alive with the sound of music and the bleating of hungry sheep who’ll nibble on anything they can reach, making it difficult to establish new trees. But if you plant a sapling at a 90° degree angle to the hillside, it makes it much harder to reach. Within a year or so the sapling develops a sabre shape as it bends upwards to the sun.

Simon Rogers, the National Trust's Community Ranger for North Snowdonia, showed us examples, scoring the volunteers’ efforts on a scale of 1 to 10. ‘That’s a 7 or 8, the gorse downhill from the sapling adds extra protection, but that one over there is a 3 or 4 – far too accessible if a sheep stands on that slab of rock’. Most of the planting to date has been in the gullies eroded by streams. These have steep sides, are partly sheltered from the ferocious winds and the grazing here is not the best i.e. the farming productivity is not being compromised.

The 5 year project, which is at the end of its first winter, will see the planting of 3,000 native trees; a mix of Rowan, Birch, Alder, Hawthorn, Blackthorn, Oak, Hazel, Willow and Crab Apple. These trees will help establish a bridge or woodland corridor between the wooded valleys of Nant Gwynant and around Capel Curig.

Funding for this project has been provided in part by a generous donation from the Royal Oak Foundation (the American partner of the National Trust of England, Wales and Northern Ireland) to commemorate Fiona Reynolds’ time as Director General. Fiona was a close friend of Esmé and Peter and enjoyed many visits to Dyffryn Mymbyr. Funding has also been provided by the Esmé Kirby Snowdonia Trust.

Small Copper on the Forget-Me-Nots

At long last the garden got a soaking yesterday and today it was brilliant sunshine but cool; perfect for a bit of hard graft digging out a 10 year old compost pile. It’s several feet deep with extensive nettles and their yellow roots, so satisfying to pull out. Also deep in the mix are bracken rhizomes, bursting with energy. Both nettle roots and bracken rhizomes are drying out on top of the wall.

Mixed in with the weeds and soil was the odd bit of rotted carpet that I had put down to inhibit the weeds. For some reason I thought it would be biodegradeable, but it’s not, certainly not in my lifetime. I’ve got a black bin liner full of the various strands.

Sadly I have destroyed a couple of vole homes, globes of dry vegetation beneath the soil. A small toad looked indignant as I relocated it a couple of yards away. But star of the show was the butterfly flitting on the profusion of forget-me-nots. If I’ve read my guide correctly I think it’s a Small copper.
Posted by Unknown at 20:54 1 comment:

Gerald and Kim Dewsbury will be exhibiting a new collection of their work from 26 April to 20 May, at:

Gerald's painting 'Standing in it', depicting a flooded field near Tre'r Ddol, was the perfect cover for Natur Cymru no. 50 which was published following the severe storms of winter of 2013-14.

You can see more of Kim's and Gerald's work at www.welshart.net
Posted by Anonymous at 12:11 No comments:

Watching wild goats can be a bit obsessive and part of the gang was chilling out at the edge of the reserve by the top of our garden. A couple were in the shade beneath the trees but Billy the Kid (born February 2014) was in the sunshine with his aunt.  He just couldn’t settle down. Will they be mating this autumn? I also love the birdsong with the cuckoo that arrived a couple of days ago.

22nd April saw the arrival of our first swallow swooping round the vegetable garden.
Posted by Unknown at 07:27 No comments:

Here's something that might interest anyone who's hanging around Snowdonia at the end of April.

John is an independent consultant specialising in strategic advice to the Australian parks sector, and Project Manager for the Healthy Parks Healthy People guidelines for IUCN.

Admission: £3.00, including tea and biscuits.
Posted by Anonymous at 11:23 No comments:

Walk on the Wild Side at the National Botanic Garden Wales

The ABC of Spring Woodlands

In the latest issue of Natur Cymru Bruce Langridge describes the hard work and commitment needed to manage a farm for nature at the National Botanic Garden's Waun Las National Nature Reserve.  It may be a little early yet to see hay meadows, orchids and hedgerows full of butterflies, but Spring has really sprung and now is the perfect time to get outside and enjoy the woodlands, wildlife and wildflowers near where you live.

So why not join NBGW’s nature expert Deborah Sazer on a Woodland Walk Weekend, when she will be examining the A,B,C of wild flowers: anemones, bluebells and celandines.

Deborah is leading two walks per day – at 12 and 2pm  – and is promising to reach parts of the Garden you may not have visited.

These include the Forgotten Falls of Pont Felin Gat and the bluebell-rich Springwoods.

The Garden is open from 10am to 6pm with last entry at 5pm.

Admission to the Garden is £9.75 (including Gift Aid) for adults and £4.95 for children over five.  Entry is FREE for Garden members and so is parking.

Posted by Anonymous at 14:18 No comments:

Your Ancient Tree Forum Needs You!


Natur Cymru had many articles and mentions of the Ancient Tree Forum in its pages. If trees are your thing, now there's a chance to get more involved.

Tracey Lovering is starting up a Welsh branch of the UK Ancient Tree Forum and is inviting all interested people along to the first meeting on 23rd April. If you are unable to make this date there will be other opportunities to meet this summer and autumn across Wales.To book a place, register an interest, or for further information, please email Tracey at t.lovering@btinternet.com
The National Trust are generously hosting the first meeting at Dinefwr Park, Llandeilo, Carmarthenshire. Brian Muelaner, UK Chair of Ancient Tree Forum Wales, will be there to introduce everyone to the Ancient Tree Forum, and set the context for the day. Brian has visited Dinefwr Park previously, and suggested the site as ideal for the first meeting as it has a range of notable trees.
If you are a National Trust member please ensure you bring your card on the day, as all scanned memberships will help towards the cost of the room (which NT will meet).


15.15 Next steps (inside session); discussion on provisional programme for year

The National Trust have been offered a synopsis of the day, and also any findings or records which the Trust can add to the knowledge already existing for the site. If you'd like to volunteer to help produce this synopsis and/or collate records, please let Tracey know.
Here's hoping it's a good day and the weather is kind!

Posted by Anonymous at 13:26 No comments:

It was a cold old day, the coldest for at least three weeks, and the central heating had been switched into hibernation over the Easter heatwave. Warm drinks, a down jacket fit for the Arctic and hot soup for lunch kept the chill away. 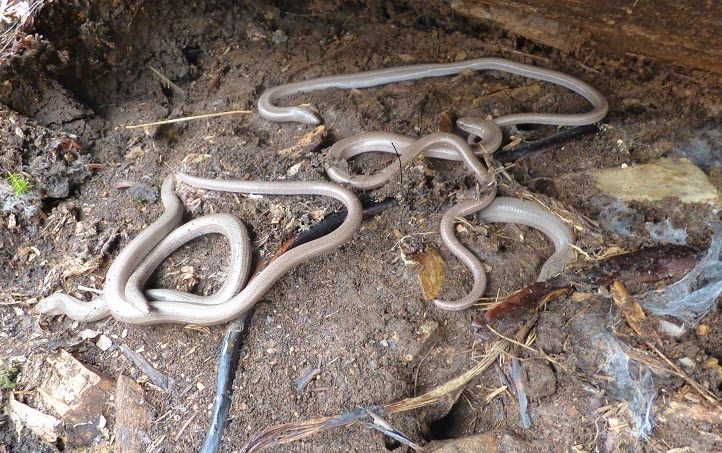 Dull skies didn’t make the idea of an afternoon walk any more appealing but Molly (dog) is a stickler for routine and her exercise. Within minutes of entering the reserve we were both as warm as toast; me with hat and gloves and Molly chasing the Frisbee.

Half way round I saw a slow worm’s nose retreat beneath a boulder. I couldn’t resist a peek and lifted it; I shouldn’t have done that. There was a family of at least five and my rude interruption caused them to slowly (it was cold!) retreat to the far edge of the boulder which was resting on the ground. I couldn’t just release the rock for fear of squashing them, so I wedged it up, placed some flat stones beneath and backfilled with dead bracken and leaves. Hopefully they will be alright but I feel bad that I disturbed them. 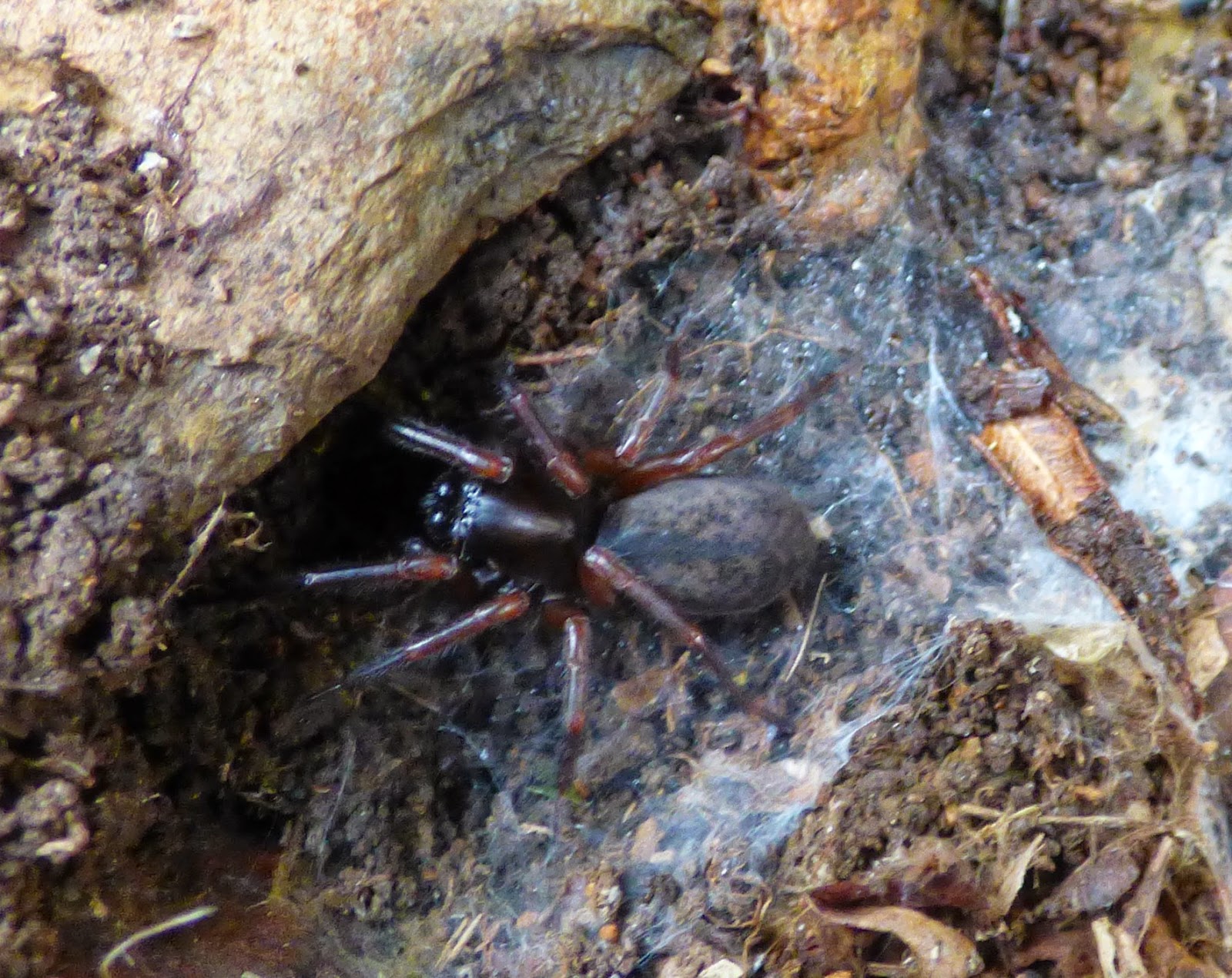 As you can see from the photo there were cobwebs beneath the boulder and some impressive looking spiders co-existing with the slow worms. I assume slow worms don't eat these spiders. Does anyone know what type of spider?

A little further on and we bumped into the gang of goats with Supernanny; she’s given birth to twin kids twice in two years. There are now seven in the family with an auntie looking after last year’s kids and an impressive Billy always guarding the rear. This is what they looked like:

The Far End at Bodnant

Bodnant Garden seemed huge when I was dragged around as a child but it’s a lot bigger now and I no longer need any encouragement to explore. In recent years the gardeners have opened up new areas such as Old Park, Yew Dell and most recently The Far End, an extra 10 ½ acres. As its name suggests it’s about as far as you can get from the reception, a gentle downhill stroll, perfect for mobility scooters, buggies and wheelchairs.

The Far End is based around a series of ponds that ensured a steady supply of water to the mill. One of them is the Skating Pond, which is where the owners used to skate in the winter and go boating in the summer. Another is the Otter Pond, so named after an exhausted otter took refuge here and Lord Aberconwy ordered the Denbigh Hunt off his property. The ponds are connected by streams crossable by a perfect Billy Goats Gruff bridge and, for the more adventurous, a set of stepping stones complete with hand rail.

In early April the camelias were still blooming (delayed by a winter cold snap), magnolias were stunning, daffodils had just passed their peak and skunk cabbages were looking brilliant. If you want to know why they get their name, just rub the flesh of the plant and take a whiff.

For many people the most iconic sight is the Laburnum Arch, with countless coachloads coming to see its blooms in late May to early June. But it was good to see it naked, after two gardeners had spent most of January and February pruning and tying it into place. It looked more like basket weaving than gardening.


A new head gardener has been appointed, John Rippin, who follows in the footsteps of Troy Smith and before him the three generations of the Puddles.