Strong winds peeled the bark and sapwood off an old oak leaving it naked amongst the rest of the moss clad trees.

A network of gouged-out channels marked the progress of the woodlice in dismantling the tree. I picked up a piece of soggy wood a few metres from the trunk and separated the fibres revealing a hungry woodlouse chomping away, oblivious to the mayhem all around.

My book tells me woodlice are not insects, but crustaceans; more closely related to crabs and shrimps than insects. Do they turn pink when boiled? A woodlouse cocktail as a starter?
Posted by Unknown at 08:53 3 comments:

Email ThisBlogThis!Share to TwitterShare to FacebookShare to Pinterest
Labels: woodlice

One of our Christmas walks was to Moel Dduallt, to see how it was recovering after the big fire last April. Six fire crews were out that night, one of which guarded our house in case the wind brought it our way. 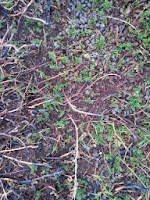 When we first saw the smoke we ran up the mountain with a couple of beaters but as we crested the ridge and saw what was coming our way, we knew to leave well alone. The flames were huge and moving fast.

The trunks of the trees look charred but alive. Bilberry is sprouting beneath what were dense stands of heather. New heather is emerging.  I particularly liked the island of sphagnum which had held fast in the height of the blaze.

Gales and the birds

Nineteen months ago I enjoyed watching woodpeckers in Coed y Bleiddiau, next to the Ffestiniog Railway.

Oblivious to steam and whistles the parents kept up the relentless supply of food. I mentioned this nest to a fellow walker the following summer, saying we might be lucky and see them there again. He politely explained that they never nest in the same place and recent gales explained their wisdom as the tree lay on its side. It was a good opportunity to see the inside of an old woodpecker nest; deep with lots of soil and a few worms.

Several years ago a good friend gave us an owl box as a Christmas gift. Each new year, just before he comes to stay, I check for pellets at the base of the tree but to no avail. I went to check this December and the box had been blown off the tree. Lots of leaves which could have been blown into the box but the woven grass and moss must have been carried in. Molly loves squirrels and can spend hours patrolling the base of a lone tree; I think she recognised their scent.

Swifts – life on the wing – Stephen Bladwell. Fascinating details from the Swift Inventory

In defence of wild land – the John Muir Trust in Wales – Stuart Brooks. Safeguarding the future of Carreg y Saeth

Marine matters – Ivor Rees. Can ecosystems be rebalanced while fish go with chips?

Mammals round-up – Frances Cattanach. Reports of otters and deer: getting involved with MaMoNet

The winter edition of Natur Cymru is now available. To order your copy please contact us or take out a subscription here.
Posted by Unknown at 09:21 No comments:

Ebb and flow at Maentwrog

Most people know the Dwyryd is tidal up to the bridge at Maentwrog; the road is also tidal.

Monday to Thursday sees a stream of vehicles heading west up the Oakeley Drive. Each morning I pour myself a cup of tea, put a saucer over the mug to keep it warm and then take Molly (dog) out to do her toilet. At 06:30 a torch comes in handy.

The darkness all around, with barely a house or street light to be seen, accentuates the headlights of commuters on their way to work at Trawsfynydd. There are probably 50 vehicles going west to every vehicle going east. During construction the nuclear power station employed 750 workers. During its 26 years of generating electricity it employed 240 people per shift. Generating ceased in 1991 and decommissioning has been going on for many years. I knew it was a big employer but was staggered to read that it currently employs 967 people, mainly contractors and 209 local employees who work directly for Magnox.

It’s good to have so many jobs, but who is paying for them? If the average annual earnings were £20,000 the salary bill would be almost £20 million a year.

It’s that time of year when bat people go into the mine adit beneath our drive in the Maentwrog nature reserve to count the hibernating bats. The adit runs 200 feet into the mountainside with waist deep water at the entrance, best not tackled in leaky waders. 150 feet into the adit you rise out of the water and that’s where the lesser horseshoes start to be found.

The highest number recorded in recent years was 116 but today it was just 25 plus a solitary (and very rare for these parts) greater horseshoe.  Is it the same one as last year? Is it a he or a she? What are the chances of he or she mating?

It’s been an exceptionally mild autumn / winter to date with only one night going slightly below freezing and this morning it was 3° outside and 10° at the far end of the adit. Six lesser horseshoes were seen flying at Plas Tan y Bwlch the evening before so maybe the bats are enjoying a much longer feeding season. Will this mean fat bats next year?

£6m and the State of Welsh Nature

The State of Nature Report, published May 2103, was a damning indictment of human impact on the natural world. Iolo’s impassioned speech cut through the bullshit and, in case you missed it first time around, here it is again:

The Welsh Government response is the creation of a £6m Fund for Nature to be spent by March 2015. Ideas are needed by 16th December, and presumably the best ideas will be able to bid for various grant schemes to be offered in early 2014. Government guidelines are: ‘Ideas need to be practical action for managing land and water that will benefit nature, create opportunities for new jobs and income and support communities.’

I submitted some ideas prepared with colleagues and went along to a workshop at Llandudno Junction today. The purpose was to share ideas and seek synergies but I left with the feeling that everyone was in broadcast mode, arguing their particular niche. How will the facilitators make sense of the flipcharts and the multi-coloured post-it notes bearing messages such as ‘carbon’ and ‘flood alleviation’?

I hope there is someone able to cut through the self interest. Speaking of which, and on behalf of Natur Cymru, I submitted an idea titled: ‘Actions speak louder than words but words make actions go further.’
Posted by Unknown at 20:52 No comments:

Email ThisBlogThis!Share to TwitterShare to FacebookShare to Pinterest
Labels: £6m Fund for Nature, State of Nature

Briquettes and Biogas from Biomass

Two blue containers are parked up at Hafod y Llan, the National Trusts’ flagship farm near Beddgelert, to demonstrate the conversion of biomass into biogas and briquettes. Short cut silage is passed through a hydrothermal conditioner, basically a 45 minute warm shower, washing out the bulk of the minerals, such as potassium and sulphur, which you would not want in a solid fuel. 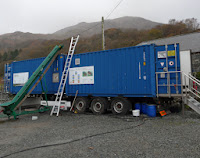 The brown liquid, with the washed out minerals, goes into an anaerobic digester whilst the rest, the ‘pressed cake’, is dried out and then compressed into briquettes ready for storage and ultimate burning in a two-stage combustion boiler.

The demonstrator was made by the German University of Kassel. An industrial scale version, which produces 700Kg of briquettes an hour plus the biogas, has been operating for six months in the city of Baden-Baden.

Within Wales the partners involved in promoting the technology are the Severn Wye Energy Agency, the National Trust and Cwm Harry. The technology is called IFBB which when Googled is likely to return something about Body Building. This IFBB stands for the Integrated generation of solid Fuel and Biogas from Biomass. 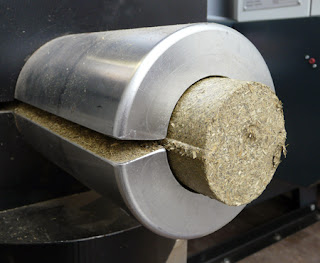 The National Trust is keen to explore how some of their most plentiful nuisance plants such as rush, bracken, and gorse, can be converted into energy. The Trunk Road Agency is also involved; do trunk road verges amount to 10% of land in Wales? There are huge benefits to biodiversity if roadside cuttings are removed (see Plantlife campaign) and the extra cost of removal could be compensated by fuel production.

So, there are many reasons to hope that this technology can be effectively implemented. You can hear the German scientists describing how it works on this Sunday’s Country Focus, Radio Wales. If you want to see it in action, contact Wyn Owen, the farm administrator at Hafod y Llan; the demonstration units should be around until the end of March. In case you don't get there, this is what it looks like: