The Smoke that Thunders

Sunday morning, chucking it down, squelching in the mud to dig potatoes for roasting. Definitely not a day for tops of mountains, so off we went, water-proofed through the still forest to the gorge at Coed Cymerau. 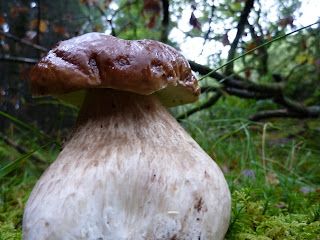 Carrying cotton bags in case of edible fungi and as per norm, we found lots of tasteless and poisonous ones. But there, in the middle of the dark path, with a flared trunk, seemingly growing out of stone, was a big penny bun. The fungi book said that in terms of taste, this was second only to the truffle. As I write this I’m 30 minutes into a small slice and still alive, so it looks like a gourmet starter to our Sunday roast.
A bit further along were chanterelles, with their forked gills and apricot scent, nudging through the moss, so easy to miss or trample. Next were the hedgehog mushrooms, with unmistakeable undersides, resembling a close cropped, albino hedgehog. And then an enormous cauliflower fungus, enough to feed a family. Bags weighed down, this has to be our most fruitful fungi walk.
Food apart our spirits were raised with the sparkly, shiny greens of mosses, ferns and lichens as we dropped down into the humid gorge. The roar of the water, crashing through the rocks, sending spray high into the canopy. The footbridge over the Goedol, like a mini crossing between Zambia and Zimbabwe, but without the crocodiles below.  Wet Sundays in gorges are great.

The fat of the land – fruits and berries 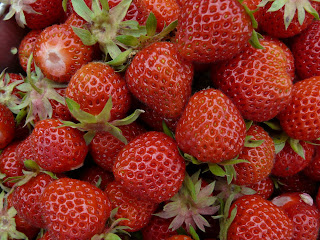 June was good with strawberries cropping at 5 kilos a day, double my weight in the month. We ate them as we picked, served with cream or as smoothies over ice cream. Some went into jam, others got pickled in sherry or vodka. Our neighbours had their fill and some were swapped for shiitake mushrooms. 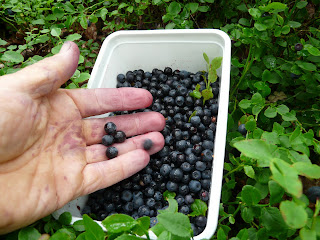 Then came the bilberries and once we’d got the hang of it we could pick 3 to 4 kilos in a session. Purple lips a bit of a giveaway to who’d been eating on the job. All sorts of puddings and perfect for freezing, on a tray, then poured into a bag. First up makes the tea and thaws a bowl of berries on the Aga. We should have enough to purplify our muesli until at least Christmas.
Gales in September and the goats knew to come down the mountain to scoff windfalls beneath the apple trees. Damsons weigh down the branches but blackberries came and went fast – instead of ripening in an Indian summer they moulded in the mist and rain. Bright red berries on the rowan and hawthorn don’t seem to mind.
With only so much space in the pantry and freezer it was time to expand with winemaking into the cellar. Racking was erected along one wall, carefully working round Colonel Campbell’s explosives chest. Advice was taken, books studied, equipment and ingredients purchased and then the first attempt.
Bilberry wine has always sounded appealing, maybe it’s a childhood throwback from Pogles Wood. There were enough berries to make several gallons but, just in case it didn’t work, I stuck to a gallon, keeping the rest of the fruit for mueslis and puddings. For 5 days it bubbled away in a fermenting bin, with a regular stir, then got transferred to a demijohn and into the cellar. There it sits next to the damson wine, blackberry wine and has recently been joined by the strawberry – when I’m in the cellar I love the gurgles of gas popping out of the air locks. The strawberry, with its champagne yeast, is bubbling the fastest. 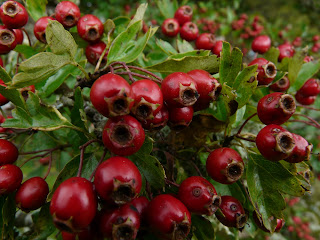 Hawthorn berries are in the fermenting bin at the moment – the tree at the bottom of the vegetable patch is covered in them and the 3lbs I removed, a small fraction of what’s left for the birds.
What next? A never ending list of recipes to try out: rowanberries, gorse flowers, young oak leaves, etc. but what will it taste like? Fingers crossed the bilberry will be ready and good enough for Christmas Day.
Posted by Huw Jenkins at 08:59 No comments: 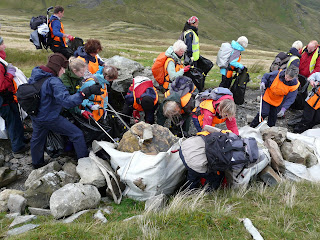 Why oh why? Litter anywhere is bad news but on the nation’s favourite mountain it’s shameful. Our beacon of national identity despoiled with crud and crap. How very dare they! The trouble with litter, the more you’ve got, the more you get - like a magnet.
September after a busy summer and at least the Llanberis path is looking a bit tidier thanks to 37 volunteers - organised by the Snowdonia Society, with help from CCW, the national park wardens and a free ride on the mountain railway.
Plastic stirrers for hot drinks at the summit, why not wood? Neither should be thrown but at least the wood will degrade. Dog poop sealed for longevity in knotted poop bags. Bottles, carrier bags, cans and the usual suspects. Boxer shorts and a pair of curtains? A canister marked ‘GRENADE’ turned out to be a smoke bomb to test the wind before landing a helicopter.
Huge bags of boulders, flown up to the eroded track ready for the footpath gang, stuffed full of all sorts. Extracting a nappy I was grateful for my rubber gloves and ‘handy helper’ – extended claws that together with the orange tabards made our gang look like a mutant species.
'Leave only footprints, take only photos' – here’s the YouTube. http://www.youtube.com/watch?v=kywZPGdsF-A
Huw
Posted by Huw Jenkins at 06:40 No comments:

Pride of Bilbao – from Wales for whales 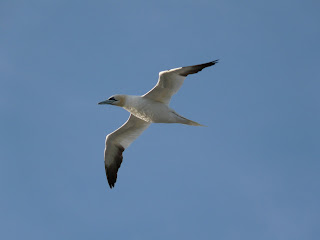