Chanterelles out but Cranberries in

Last Saturday of the month, must go to the Porthmadog local produce market; no pre-planned menu, just see what’s available. A pair of sea bass fillets and a dressed crab from Gill’s Plaice. Radicchio grown in the polytunnels at Gardd Deudraeth. Kurmang’s latest invention from the Blaenau Model Bakery, a flat bread with sesame seeds. 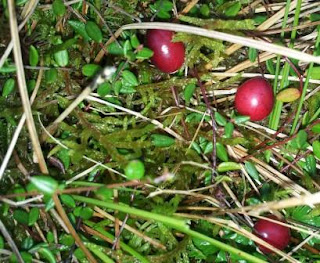 As I drove home a Jamie Oliver recipe came to mind. Drat! I should have bought some mushrooms from the Mushroom Garden. Stopped off at my favourite wood for chanterelles but slim pickings, just a few, enough for flavour and probably the last of the season.

After lunch Sue and myself went cranberry picking up the mountain, squelching in the bog, parting the sphagnum to reveal bright red berries linked by thin vines. Growing conditions must have been good and we harvested much more than last year, an ice cream tub, enough to make some sauce for our neighbours as well. 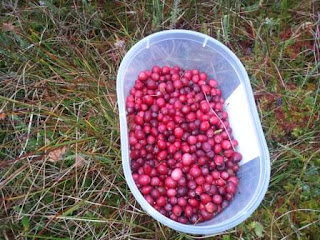 Snowdonia hosts spectacular sporting events such as the Snowdon Race, Étape Eryri, the Snowman Triathlon and yesterday was the Snowdonia Marathon. Staging these events involves a huge volunteer effort and feedstation five, on the way into Beddgelert, was staffed by volunteers from the Snowdonia Society. 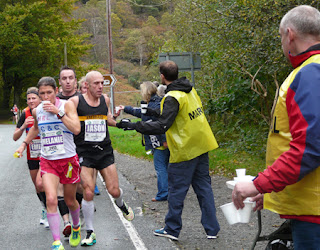 We followed our instructions laying out refreshments in the prescribed sequence of water, squash, isotonic and gel. 75 minutes after setting out from Llanberis the front runners, with police escort and motorbike mounted cameraman, raced past totally ignoring our goodies. For the next ten minutes runners arrived in ones, twos and threes but then it was rush hour; so many customers it was difficult to maintain high standards of service. The knack of placing a polystyrene cup into a runner’s tired and moving hand is a skill that comes with experience, better practised with waterproofs.


It’s a popular event, sold out six months in advance, with good humoured runners, lungs full of invigorating mountain air. An event which is a welcome out of season boost to the local economy with many competitors travelling and staying the weekend to take part.  Thank you to the runners, the volunteer marshalls, the sponsors and especially to the organisers who make it happen and last year donated £14,000 to local good causes.

This year's winner was Rob Samuel, from local club Eryri Harriers, with a time of 02:43:50. 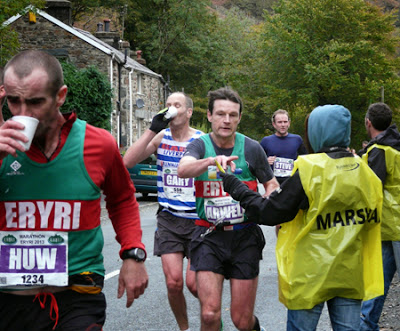 The sad, leaning pylon off Portmeirion

No-one seems to have a kind word for pylons and this one, in the Dwyryd estuary, upstream from Portmeirion, is looking particularly sad. It’s built on a platform which has been eroded by the ebb and flow of tides, possibly made worse by the construction works on Pont Briwet. 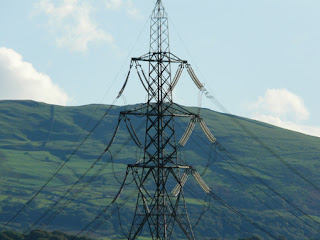 A couple of weeks ago an inspection revealed that the pylon was leaning and the structure distorted. Power was switched off, the bridge and road closed, and last weekend the heavy cables were lowered and severed.

The Snowdonia Society has campaigned in the past to have these cables undergrounded for the sake of the spectacular views, particularly looking up the Dwyryd estuary, every bit as stunning as the next door Glaslyn. A recent concern was that money spent now, to fix this pylon, might jeopardise future chances of having this section undergrounded; especially relevant as a £500m fund has just been established to reduce the visual impact of transmission lines in protected landscapes across the UK such as Snowdonia.

Naïvely I wrote on behalf of the Society to ask if there was any chance of undergrounding the cables now, and David Vernon, an employee of National Grid, took time out to visit and explain to me how impractical that would be. Undergrounding is of course a complex task requiring a great deal of planning and consultation, especially so as this pylon is situated in land which is protected as both a Special Site of Scientific Interest (SSSI) and a Special Area of Conservation (SAC).  If they were to underground here, it is most likely it would be through building a tunnel, maybe 15 metres or so deep.

David also explained the significance of this line which is vital to the UK’s transmission network. Until it is reinstated, all power is being routed through the line of pylons on the north Wales coast. This does not have the capacity to take it all, so we are having to pay Wylfa and Dinorwig to cut back on production; money which ultimately will be passed on to us in our electricity bills!

Basically there is no higher priority within National Grid than to fix this problem and quickly.

Consultations are proceeding apace with Natural Resources Wales, Snowdonia National Park and Gwynedd Council. It is likely that a new pylon will be in place, about 50 metres north of the edge of the estuary, within a couple of weeks and the lines reconnected shortly after that. The pylon might be an L6 or an L8 and I’m hoping it’s an L8 because that model of pylon has a short shelf life, maybe 5 to 8 years. If that’s the case, then the possibility of having this monstrous string of pylons removed will be much more likely.

Whether it turns out to be an L6 or an L8 we have the assurance of National Grid that, whatever the solution and expense for this short term solution, it will not jeopardise our campaign to have this section undergrounded.

Before you get carried away please remember that the total fund for all the protected landscapes in the UK is £500m. Each kilometre of overhead cabling costs £1.5m. Each kilometre of underground cabling costs much more and depends upon the complexity of the geography. Recent figures for undergrounding in Powys suggest that each kilometre might be £7 to £8 million i.e. the total pot for the UK is equivalent to 60 to 70 kilometres. If we could get 6 or 7 kilometres that would be great – but then again, I think we have more kilometres of pylon lines than any other national park.

I was puzzled to hear the John Muir Trust (JMT) was planning to buy land in the Rhinogydd; why something so Scottish coming to Wales? Surely there are enough wild places in Scotland? Aren’t there already enough conservation charities in Wales? Susan Wright, Head of Communications at JMT, put me straight.

What I hadn’t appreciated was that the Trust is a UK-wide charity with significant membership in England and 250 members in Wales. There are also 100 providers in Wales for the Trust’s educational initiative, the John Muir Award.

What I also hadn’t appreciated were the international credentials of John Muir himself. Born in Dunbar, he emigrated to America with his family as a ten year old, and went on to become the leading light campaigning for the establishment of national parks. I particularly liked hearing how in 1903 he got President Theodore Roosevelt to join him on a three day camping trip at Yosemite. Who would be the modern day counterpart for Obama? and where would they go?

So now I understand the background and wish JMT every success in raising the £500K to buy the 104 hectares of land at Carreg y Saeth, just before you reach Llyn Cwm Bychan, en route to the Roman Steps. The money will also fund the employment of a local development officer and a forward looking management plan. Looking to the future, I hope there will be an article in Natur Cymru about the achievements following on from the successful appeal.

Follow the link if you would like to learn more about the appeal to buy Carreg y Saeth Isaf.
Posted by Unknown at 22:14 No comments:

Not many people know that the wonderful Triglav National Park in Slovenia is twinned with the Snowdonia National Park. Twinning began in 1993, shortly after Slovenia became independent from Yugoslavia, and over the years there have been exchange visits to and from both parks. This week I had the pleasure of meeting four members of Triglav while they were staying at Plas Tan y Bwlch.

As we chatted I mentioned some favourite memories of people I had met a few years ago including Urban, who had introduced me to the pleasures of hand milking sheep and goats 1,200 metres up a mountain. Every afternoon a solitary shepherd gathers over 200 sheep and about 50 goats from pastures as high as 2,200m. No sheepdogs, just a call or a whistle and the little darlings walk downwards in an orderly line with their bells clanging as they descend.

After some food the sheep are milked by hand by the five farmers working together as a co-operative and sharing the milking according to the number of sheep they own, a farmer with seventy sheep will put in seventy days of milking during the season. As for the goats, they are milked last and kept separate from the sheep to avoid fights. After a night in the barn and early morning milking, the animals are turned out into the pasture and the daily cheese production gets under way.

Goats’ milk is added to the sheeps’ milk, heated up in a copper cauldron over a log fire and made into big rondels of cheese. In June the flock yields about three hundred litres of milk per day, whilst by August this is down to a hundred litres. At the end of the short season two tonnes of cheese will have been produced and sold for about £20,000.

I asked Urban why no sheepdogs? ‘We don’t need them. We have a relationship and we know them by their names’. It’s difficult to imagine Snowdonia farmers gathering without dogs.

It was good to hear from the Slovenian visitors that Urban and his sheep are going strong, and that alpine farming is alive and well in the Triglav National Park.
Posted by Unknown at 12:59 No comments:

The next Natur Cymru will have an article by Graham about the BTO’s work on satellite-tagged Cuckoos which has produced such incredible results on where and when our Cuckoos go, outside the breeding season.

The book launched yesterday is the first on the birds of the whole of North Wales since Forrest in 1907. It is based on 5 years fieldwork (2008-12) by hundreds of volunteers, enabling the mapping of all breeding birds in North Wales at the 2x2 km scale. Each species account has this tetrad map, plus three 10x10 km maps showing how the distribution has changed in the last 40 years. And of course photos of all the birds and an excellent selection of habitats, plus introductory chapters about our changing birdlife.

Species accounts are written by the four editors and other knowledgeable individuals. Each species account is sponsored by individuals or businesses which raised the money for publication by LUP. The introductory chapters are fully bilingual as are the Red Kite and Greylag Goose accounts; all other species have Welsh summaries. Copies of the book are available this week (only) for £20 +delivery (£3.50 for first copy, 50p per copy for extra copies). £45 after this week (but no doubt less on Amazon). If you would like to place an order, ring Janet at LUP on 0151 794 2233 (office hours) and say Anthony said the offer is still on until Friday!
Posted by Geoff Gibbs at 12:34 No comments: