The Wild Wales series was broadcast in three, one hour episodes: The Beautiful South, Heart of Wales and The Rugged North. It includes spectacular footage of hen harriers passing prey and an osprey diving into the Dwyryd estuary - after several attempts a fish was caught then repositioned mid flight, to be head first aero dynamic, as the bird flew at eye level past Portmeirion’s visitors seemingly oblivious to the natural spectacle. Did you know the red deer on Ramsey are bigger than those in Scotland? What comes across in the series is the immense range of plants and creatures for what is a relatively small piece of geography.

The series was first shown on BBC and is now available as a DVD box set.

The southeast - another country, another world

Last weekend I enjoyed a trip to the south east of England, where I used to live. It was great to see familiar places in a new context but despite the memories it felt foreign. Free carrier bags apart, the dryness of the ground was most striking, especially on my knees. Running along the Thames towpath in fell-running shoes was a bad idea; there was no give in my shoes on a surface as unforgiving as long set, lumpy concrete.

We walked a fifteen mile route between Marlow and Henley without crossing a drop of running water; a dried up stream in the Hambleden valley (Vicar of Dibley territory) and one or two spots of squidgy mud in the woods. The only body of water was a moat around a very expensive looking farmhouse done up by an Iranian family complete with its own mosque.

Red kites, re-introduced from Spain (why not Wales?), dominate the sky for miles around Marlow. A green woodpecker flew across a field – not seen one of those for a few years.

Our day trip to London was brilliant. A boys only outing to the Imperial War Museum, followed by the National Maritime Museum at Greenwich, reinforced in my mind what a warring nation we are. At one stage I thought we were under attack as a platoon of French soldiers walked towards us but they were only extras in Les Misérables being filmed at Greenwich. In front of the museum, beneath the observatory on the hill, a massive scaffolding construction was being erected for spectators of the Olympic equestrian events.


Another outing, to Oxford, was an eye opener as we strolled around university colleges with their immaculate gardens. A short walk from Keble and into the Natural History Museum complete with a display of the Red Lady of Paviland. From there into the adjoining Pitt Rivers Museum with a most bizarre collection of glass enclosed exhibits including the finer points of how to make shrunken heads.

The cultural day was rounded off with a Wycombe Wanderers home match against Oldham. I’d forgotten just how bigoted football fans can be and the joys of a live game with a mug of steaming Bovril. Even better with red kites swooping behind the stadium. 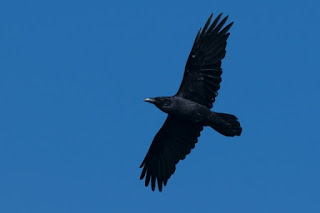 One of the Editors for their excellent magazine is Rob Collister, a keen supporter of Natur Cymru; you can read his article on unwanted fencing in the mountains in #36 – it was a runner-up in our competition. Their latest magazine is all about outdoor recreation in Snowdonia. Rob invited me to write an article for them on the mountain birds of Snowdonia, which is on pages 18 & 19. It is based on a spring walk from Bethesda to Capel Curig, and the typical birds you can see along the way – some of which are quite special to Snowdonia. It includes photos of a Chough and a Reed Bunting, kindly provided by Malcolm Griffith.


The Editor chose not to use Malcolm’s Raven so I’m including this here instead. Other articles cover a wide range of outdoor activities in the Park, some of which may impact on the natural environment. Helen Berry writes about the feeling of wilderness and what she most dislikes in the mountains – discarded rubbish, low-flying jets, noisy groups of people, off-road bikes…..

There’s plenty of interest here and you can read all the articles by going to http://issuu.com/cymdeithaseryri/docs/snowdonia_soc_mag_spring_2012
Posted by Geoff Gibbs at 22:55 No comments:

Above Pont Garreg Hylldrem, where the road from Llanfrothen turns a leftwards right angle towards Beddgelert, there’s an overhanging cliff popular with climbers. It was popular with stone age hunters too, not for climbing but for the welcome shelter of the overhang on a platform about ten metres up from the sea or estuary below. 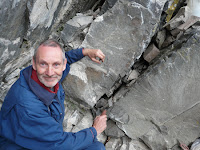 Local resident Clive Hudson was climbing there on Christmas Day 2007 (I didn’t ask why or whether it was before or after lunch) when he spotted a limpet shell wedged within a crevice. How had it got there?

Subsequent excavation, under the supervision of Bangor University, has uncovered several hearths and many shells: oysters, cockles and winkles as well as limpets. Mixed in were pieces of bone, probably deer, and so far 42 pieces of worked flint. Three limpets from different parts of the site have been carbon dated as being from 7379, 9281 and 9349 years ago. 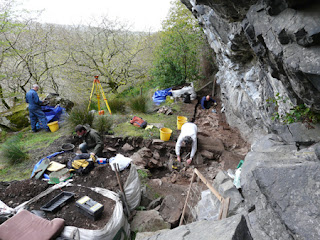 Under normal soil conditions the high levels of acidity in north Wales would have caused the shells and bones to disintegrate but lime, seeping out of the overhanging rocks, has altered the chemistry thereby preserving these relics. Just a short distance beyond the overhang and normal acidity returns.

Dr Gary Robinson, lecturer in archaeology at Bangor, describes the site as a hunting camp used on a regular basis for a few days at a time before returning to the home base. ‘It might have been for three or four hunters out on an expedition, maybe pursuing deer or spawning salmon on their way upstream. ‘ 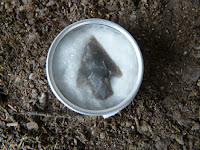 The low volume of shellfish remains suggest that these were snacks as opposed to the main diet of the hunters. Strangely one of the mussel shells is a species never before found in Wales but present in the Mediterranean. Was the sea warmer all those years ago?

Towards the end of the dig, in April 2012, a flint arrowhead was discovered, probably dating back to the bronze age. If that's the case, then this rock shelter was used for 5000 years.

Migrating tourists started to arrive and the weather put on a spectacularly varied performance. On the first wet day I was taken for an explore 600 metres or so into Rhosydd Quarry overlooking Cwm Croesor – it took the Victorian miners eight years to build the main adit on level 9, working in both directions and meeting at exactly the right spot without the aid of laser gadgets. Not much sign of wildlife inside except a few cavers emerging out of the inky darkness.

The following day we had blizzard conditions in the mountains giving a perfect excuse to catch up on office work and participate in my Natur Cymru meeting by audio conference. Sunshine broke through the following day and although the list of chores was long there was nothing for it but to go up the mountain and enjoy the snow drifts. I can’t describe in words how much fun that was but here’s the film:

Dry and occasionally sunny conditions continued making for good progress in the vegetable patch. A passing bird watcher said she thought she’d heard a redstart but I’ve still not seen it. She pointed out a vigourous patch of opposite leaved golden saxifrage growing in the boggy bits outside our barn. Now I know its name it’s more special to me.

One of the highlights was the weasel which hopped onto the kitchen window sill at breakfast time and brought a vole or mouse out of a drainage pipe. Subsequent slow motion analysis of the video footage revealed a bit of black on the tail so the majority think it was a stoat.

Monday was a wash out, the only redeeming feature a chance to catch up with Country Focus on the BBC iPlayer. This week was the second of an excellent five part series on the Wales Coast Path which is presented by Jane Davidson. The path opens on the 5th May and there is a great article about it in the current edition of Natur Cymru.
Posted by Unknown at 07:48 No comments:

You never know what you might see through the kitchen window. My freshly stocked bird feeders and half coconut shells stuffed with fat and seed tempting the tits, chaffinch, woodpecker, nuthatch, yellow hammer, dunnock and squirrel.  Chickens scooping up the spillings. So far, touch wood, no rats this year, just wood mice and voles and ..... wow, it’s  a weasel!

It hopped onto the window sill, down to the patio then up into a drainage pipe.  I fetched the camera, tripod on the kitchen table and pointed it at the end of the pipe. Success. Out it came with a vole or mouse in its mouth then off behind planters and into the log shed.

My few seconds of video stretched with the slow motion facility ... but how do I know it was a weasel? I think there’s a touch of black at the end of its tail making it a stoat. What do you think?
Posted by Unknown at 20:42 1 comment: