For a couple of weeks I enjoyed watching a family of redstarts nesting in a gap above the front door, conveniently opposite a bedroom window from which to film. Looking back at the footage I was surprised to see the ‘potty practice’. Daddy redstart landed in the nest, delivered food then waited a while until one of the chicks turned round, raised its bum into the air and pooped out a white sack. Amazing!

Wild honeybees nesting in a tree

Today was my first time to see bees nesting in a tree; about 9 feet up an old ash in a crack (see YouTube below). This is the sort of no nonsense, no hive, no honey sort of bee-keeping that appeals to me.

On my journey round a beautiful garden in north Wales the birds were singing and the moths and butterflies flitting everywhere. That is apart from one couple which were locked in a prolonged act of passion. I’ve looked on the identification sites but still none the wiser. Can anyone help?

Email ThisBlogThis!Share to TwitterShare to FacebookShare to Pinterest
Labels: wild honeybees nesting in a tree

‘Happy Birthday’ and my present was a coracle making course at the Woodland Skills Centre in Bodfari, near Denbigh. Our tutor was James Mitchell and the coracle design was the Boyne, as in the Irish river. Apparently the Welsh design, with cleft ash, is a bit tricky for beginners, hence the Boyne, based on hazel rods or any old withy.

We selected our rods from several sheaves and tidied up their stems, removing knots and small branches. Next we made a cross, measuring 5 by 4 feet, and inserted ribs and runners; ribs along the sides and runners at either end. 8 rods or poles went down the length of one side and another 8 along the other side with 6 poles at each end. A bar was used to sink a hole 8 inches deep, into which each rod was secured.

Next came the weaving of pairs of twisted rods threading through the 28 rods planted into the ground and after two circuits of twisted pairs, then the seat was prepared. An adze was used to finish the surface of the seat giving a rustic look as distinct from the teeth of a chainsaw. Nicks were sawn and chopped at either end to fit the seat snugly between the middle 2 rods at either side resting on the twisted rods. Then a further 2 pairs of twisted rods secured the seat and poles into a rigid position.

Next came the tricky bit of bending the rods to meet their counterparts at the other side or end. The motion was a pull and a push with the occasional twist and bending over the knee. There were many ominous cracks and sometimes the rods would snap and need to be replaced. Sometimes they would split, which James referred to as ‘de-laminating’, with 1 or 2 years of outer growth separating from the rod. We were advised to stick to narrow rods of less than an inch thick; the thicker they were, the harder it was to bend them. Shaving some layers on the inner side of the proposed bend helped to make the bending process a bit easier.

At the start of day two we finished off the bending and trimmed the narrow ends of rods to squeeze through the weave. It looked very ungainly and impossible for the runners to neatly lash into the ribs, but they did. James demonstrated the ‘square truss’, an elaborate way of lashing a rib to a runner, and then I had another 47 to do. Getting a slip knot effect was an efficient way to leave both hands free and, with one and sometimes two feet on the runners, the runners were forced down to touch the ribs and secured with sisal, a length of about 2 metres per knot.
Tying seemed to go on forever and then it was time to insert the Spanish windlass, a double thickness of sisal with a rod twisted in the middle, just to keep the tension between the sides beneath the seat.

After this we needed to lever the coracle from out of the clutches of the 28 rods sunk 8” into the sandy ground. Slowly the coracle rose out of the ground, like an awaking armadillo, and then the weave was tamped down. Unnecessary and sticky-out bits were pruned out including the bottoms of the rods. Any sharp notches or blemishes were smoothed and then the coracle was set on top of a length of canvas.

We were instructed in how to sew with an upholstery C shaped needle; the sort used by Victorian surgeons. A series of 1 foot chunks were sewn at the top, then bottom then both sides, the four corners and then we filled in all the gaps; all the while pulling the canvas tight. Then the coracle was lifted onto a table, upside down, ready for bitumen. The first coat was thinned and went on easily; I say this because I was at home enjoying a beer and some supper while James our diligent tutor was painting into the solstice dusk.

On the start of day 3 we turned the coracles right side up and painted the rim. Then we turned them upside down once more on top of tables and applied a thick dollop of bitumen. You think you’re doing a thorough job until you look from beneath and see all the ‘stars’ which will leak water. For this stage you needed to team up with a fellow student; the ‘star gazer’ would lie on his or her back beneath the coracle pressing a stick at any stars or constellations whilst an extra dollop was applied to block the light. The freshly painted hulls were left gleaming in the sun whilst we went into the shed to make our paddles.

A stout hazel rod with a bend was inserted into a shaving horse and with a draw knife I made a smooth and level end onto which a paddle-shaped piece of marine ply could be affixed.  A crude handle was affixed to the top end and linseed oil applied to the paddle blade.

After lunch we headed off to a lake and James instructed us in the 3 essential skills; getting in, getting out and sculling. Sculling was nothing like those narrow rowing boats with sliding seats and a pair of oars, it was more like sticking a food mixer into the water in front of you and wiggling it around in a figure of eight. It took a while to get going but once moving, the sculling motion propelled you along quite smoothly. A single stroke with the paddle down the side had the effect of setting off a spinning wheel.

This course was my 60th birthday present and I don’t think I will ever forget it. Thank you Sue and thank you James for your patience.

Brecon Beacons – a volume of natural riches. Jonathan Mullard. The creation of the latest volume in the New Naturalist series

Wentwood – an ancient forest back from the brink. Barry Embling. From commercial plantation to broadleaved woodland

A riddle in the cliffs. Ivor & Jane Rees. Archaeological evidence for the gathering of 'sea manure'

Gobies – a guide. Paul Kay & Lin Baldock. A closer look at the goby species around the Welsh coast

Turning tides and turbulence.Vicky Moller. The case for renewable energy from the seas around Wales

From the garden. Colin Miles. Weekly surveys at the National Botanic Garden for Wales

To point or not to point, that is the question 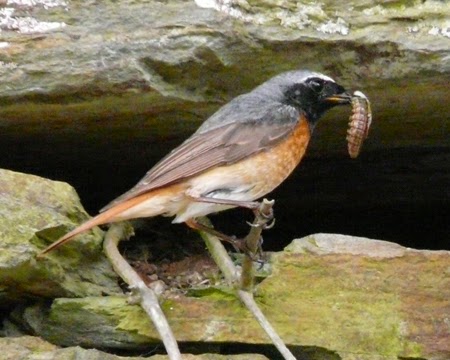 Fortunately I didn’t get round to re-pointing this side of the house and we were rewarded with a beautiful redstart nest just opposite a bedroom window - very handy for filming.

Mr and Mrs Redstart were busy ferrying food into the nest and keeping the inside neat and tidy. Will I manage to see the chicks fly off? 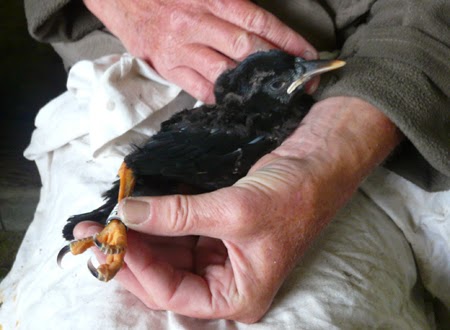 Lots of people never get to see a chough; there are only a few hundred pairs in UK and about two thirds of those are in Wales. Adrienne Stratford of the RSPB has been ringing chough chicks for the past 20 years and, between herself and Tony Cross, somewhere around 4,000 have been ringed in mid to north Wales. Today she took me to a disused quarry building on the north Wales coast where last year she’d installed a nesting platform from bits of old planks.

A pair of choughs had taken up residence, added heather, lined it with sheeps’ wool and produced two beautiful chicks. They were plucked from their nest into a pillow case, brought down a ladder, ringed, sexed and weighed before being returned to the nest. A couple of times the adults came and shouted insults at us but it was as if they knew the score; it’s that time of year again. As for the chicks, they were quite chilled out and happy to beg food with their plaintive cries and open beaks. 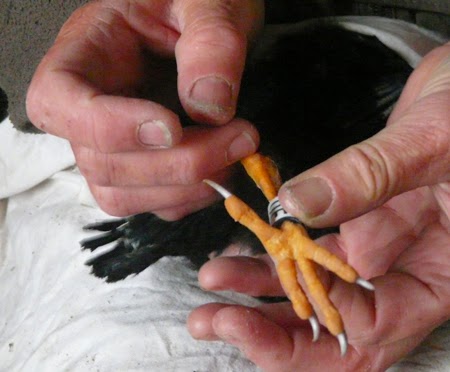 I was surprised to see the tangerine orange colour of their legs. Eventually these and the beak will turn to red.

To Adrienne the choughs are a long running soap opera. She knows their relationships and family histories and 2 of them are now 19 years old. You’ll be able to hear her talking about choughs on an episode of Country Focus in the next few weeks. For me it was a magic moment, something that had been on my bucket list. Thank you Adrienne.

After cappuccino at the Whistling Sands beach café we didn’t see a soul for the next 3 hours. Along the way so many wild flowers, birdsongs and sounds of the sea, snails galore and stunning blue butterflies in one section; how could they possibly be called Common Blue? A pair of peregrines swooped along the cliffs and as we approached Mynydd Mawr we were into the land of the Choughs, with their bright red beaks and legs and cat-like calls.

As we skirted the almost sheer cliffsides the term ‘views to die for’ came to mind.

At eye level, in a windswept sloe tree, was a nest with vibrant looking caterpillars of the Lackey Moth.

About 7 hours later, singing the praises of the Wales Coast Path, we walked the final stretch along the beach to the Tŷ Newydd hotel. My first delight was a pint of Brenin Enlli, sitting on the terrace, looking back on where we had walked. For supper the crab salad, with a shared portion of chips and mayo, was perfection, topped only by the room. With its mini balcony looking onto the beach beneath, the sea so close, we could have skimmed stones from the bedroom. Falling asleep with the door wide open was noisy but great.

The following day we walked the section including Penarfynydd where we saw a hare run across the top of the ridge above the farm. That made 3 of the Llŷn’s ‘Big 5’ – chough, peregrine and hare but alas we failed to see porpoise and grey seal.