Sand Martins, Seagulls and the Garfish

If you walk West along the beach towards Porth Dinllaen, there is a magnificent set of Sand Martin nests, tunnelled into the collapsing cliff bank. It was busy, busy towards the end of August. The chicks peering out of the nests looked big and hungry. When the parent returned with food, only 1 of 3 was happy.

hile I was admiring the view across the bay, from just beyond the Tŷ Coch, a seagull struggled to take off from the sea, with a snakelike Garfish swinging beneath its wings. Quite a heavy load. On the sand the fish made several attempts to wriggle free. Juvenile gulls tried to share the prize but the catcher was feeling selfish.

On the stump of a Scots Pine which was felled 19 years ago a beautiful slime mold has taken up residence. The shape and the colour changes each day. On the second day it had gone very pale but was colourful again a couple of days later.

Looking at photos on the web I thought it might be Red raspberry slime mold Tubifera ferruginosa and I've been told that if it develops into 'miniature cigars' that will confirm its identity. It could be a first for Maentwrog Nature Reserve!

Back from the Bird Fair at Rutland Water, lovely sunny day here if rather breezy – no day trips to Ynys Enlli (Bardsey) today! The Robin breeding season is over, they have moulted and the pairs have split up. Heard several Robins singing, the function is to defend individual feeding territories – this is the autumn / early winter song which gradually fades out leading up to December. These singing birds could include females, whereas from Christmas onwards only male Robins sing. Read all about it in The Life of the Robin by David Lack.

Not all birds have finished breeding though – lots of House Martins and Swallows about (the Swifts have all gone), and Woodpigeons carry on singing (and laying eggs) until October. No luck with Turtle Doves though this year; when I was living in North Wales in the late 1960’s, Turtle Doves were common breeders in NE Wales and a few bred on Lleyn and Meirionnydd. Now these have all gone - read about it in The Breeding Birds of North Wales by Brenchley et al (2013). I haven’t seen a Turtle Dove anywhere in Britain this year.

Getting a bit late for good butterflies, but quite a few showy ones on our Buddleia including a Painted Lady the other day and several Commas. Then this morning a Common Blue appeared (very scarce round here this year and our first in the garden for 2015), plus a very smart Small Copper. This picture was actually taken just up the road in August last year.


Several Purple Hairstreaks seen on our butterfly transect route earlier this month, we try to do this every week for Butterfly Conservation. Viewing one of these individuals I even saw the ‘hairstreak’ mark on the hindwing, usually they are too high up on the oaks or ashes to see this. They lay eggs on the oaks and visit the ash trees for honeydew.

Geoff Gibbs
Posted by Unknown at 08:45 No comments: 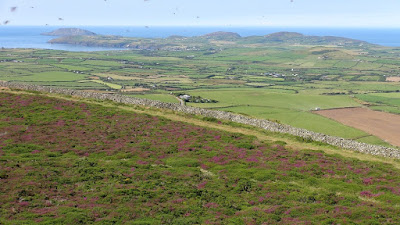 I was up on Mynydd Rhiw enjoying the summer weather with fine views across Llŷn. At the summit were loads of insects and on the rocks by my feet was a wasp scrum down. It looked a bit violent and I didn’t want to get too close in case I disturbed them.

Looking back at the film footage it looks like 6 or 7 wasps were killing a queen. Or were they mating?

In the middle sequence there was a pair of wasps stacked on top of the back of the queen whilst another stack of 4 wasps approached from the front. Was the wasp at the front a brave volunteer to confront the queen or a conscript?

Dolmelynllyn - a Year in the Life of a National Trust Woodland

I’m part way through making a film titled Dolmelynllyn - a Year in the Life of a National Trust Woodland. Basically I go with my camera once in each season and Rhodri Wigley takes me around to explain the various work that goes on at different times of year.

At the end of the year I will condense the four seasons into one film but for the moment they are published separately. So far Spring and Summer have been filmed and the beautiful Highland Cattle have featured in both.

Welsh language versions of the films are also published on YouTube. Click here for Haf and here for Gwanwyn.
Posted by Unknown at 09:19 No comments: 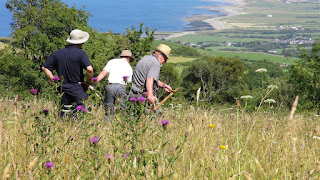 The Greater butterfly orchids had gone to seed but Caeau Tan-y-Bwlch was or were looking great.

It was a hay meadow celebration day on these traditional fields overlooking the coast from above Clynnog Fawr. The fields are owned by Plantlife, managed by the North Wales Wildlife Trust and recent recipients of funding from the Nature Fund which has covered various works such as fencing so that the land can be effectively grazed. AGAP (Anglesey Grazing Animals Partnership) was on hand to offer advice on the management of hay meadows.

A man from SABI (Scything Association of Britain & Ireland) had driven from Norfolk and was helping people perfect their technique; the swish, swish of a scythe is so soothing.

The hay meadows were not quite ready for mowing, some seeds have yet to ripen, but now was a good time for practice and inspiration with several species still in bloom. Once mown, the hay will be baled and used to help seed more meadows.

Children were being instructed in the art of butterfly netting but as you will see, Hilary loses their attention!

Peacock caterpillars - are they late? 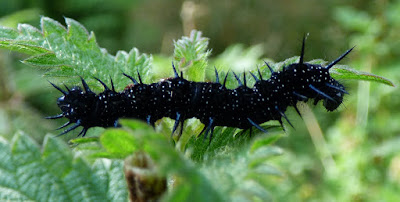 Yesterday I saw my first black caterpillar of the year, the one that feeds on nettle leaves, and eventually becomes the Peacock. It's the same butterfly that sunbathes in our windowsills and can be seen flapping around in the middle of winter.

When I saw the caterpillars I thought they were a bit late in the season and checked back; sure enough, in 2011 I had seen them on the 7th of May. Summer has been poor, but surely not that bad?

I've had a look at the Butterfly Conservation website which says that in a good year they may have a second brood. Presumably that's what has happened and I have been imagining all this cold, damp weather.

'This butterfly is generally single-brooded. However, in good years, a small second brood may appear. Adults may be seen at any time of the year, with warm weather waking them from hibernation. The majority emerge from hibernation at the end of March and beginning of April. These mate and ultimately give rise to the next generation that emerges at the end of July.'
Posted by Unknown at 20:55 No comments: