The ongoing census of Cardigan Bay’s bottlenose dolphins has so far recorded 270 unique individuals. Some are frequently seen, others on just one occasion. Identification is based on a close-up photo of the dorsal fin and, on the day I visited, one of the volunteers was trying to match a recent photo on the screen of his PC while flicking through the A4 file of likely suspects. It looked a close fit with 007, but not quite. Maybe it was another dolphin or maybe the markings on its fin had changed? 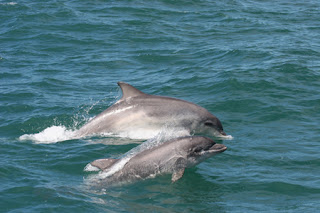 I asked Steve Hartley, manager of the Cardigan Bay Marine Wildlife Centre, whether things were improving for the dolphins? ‘We knew we had a lot but not as many as we now know. As for whether the population is growing, we need another 5 years of research before we can make that sort of conclusion.’
Most of the photos are taken from the survey boat which Steve captains, following a consistent set of survey routes. Passengers pay for the boat trips according to the length of the trip, generally 2 hours or 4 hours, sometimes longer. Along the way Steve and his research assistant point out other wildlife such as the harbour porpoise, grey seals, occasional sunfish and sea birds. The most bizarre thing he ever saw was a massive leatherback turtle ‘It must have been the size of a pool table and gave me a backward glance over its shoulder. By the time I’d reached for my camera it had disappeared amongst the waves.’ Trips are run to a strict code of conduct, the main principle of which is to leave the creatures in peace, and all local operators are supposed to abide by this code. 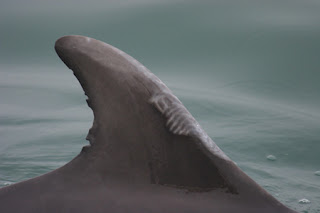 The boat pays its way as a commercial venture with the spin off being a valuable set of research information for analysis by a team of volunteers back in the wildlife centre. The ground floor of this grade II listed building, just up from New Quay’s lifeboat station, is a free of charge visitor centre with displays, an aquarium, and a volunteer run shop. Steve was quick to point out that the creatures in the aquarium were only being borrowed. At the end of the summer they would be returned, well fed and in good health, to the sea they came from.
No matter how worthy your cause you still have to pay the bills and the centre is about to launch an Adopt a Dolphin campaign. What a fantastic Christmas present. The idea of adopting a dolphin is not new so I asked Steve what would be different about theirs? ‘Firstly it’s not any old dolphin but a really Welsh, Cardigan Bay dolphin. Secondly you don’t have to drive to the other end of Britain, you can pop over to New Quay and go out to see your dolphin.’
If you’d like to know more about the Cardigan Bay Marine Wildlife Centre call them on 01545 560 032 or visit the website (not yet updated to include the adoptions).
Click here for a short YouTube of Steve Hartley explaining the adoption scheme.
NB in case of any confusion the centre is NOT involved in tagging dolphins. They only take photos.
Posted by Huw Jenkins at 11:53 No comments: 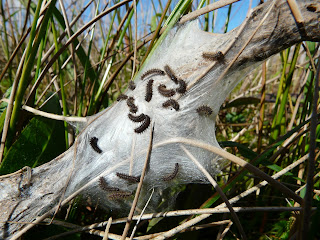 I thought it was just another boggy marsh but these were collapsed pingos. A couple of miles from the livestock market at Bryncir (Gwynedd), in open access land at Bwlch Derwin, the marsh is a series of circles. One time domes of ice formed in a period of permafrost and still growing in colder climes such as the Northwest Territories (Canada). There they have a Pingo National Landmark, home to a quarter of the world’s pingos. The largest is 49m tall and rising at the rate of 2cm a year.
Our melted domes are now a quivering bog of sphagnum and other plants. My mission was to find the autumn flowering Devil’s-bit Scabious, and fortunately most of them were at the edge and not the centre of the pingos. I looked for the blue pom-pom flowers, poking above the grass, and then scanned down to the base to see if there was a caterpillar web, a communal sun lounger for basking caterpillars of the Marsh Fritillary.
Life is precarious for this butterfly, declining and confined to just a few places, mainly in the north and west, its prospects for expanding are bleak. The caterpillars, extremely fussy eaters, will only dine on Devil’s-bit Scabious and, with changes in the way we farm, there are less sites these days. In continental Europe they eat honeysuckle but Welsh Marsh Fritillaries won’t touch the stuff, they’d rather starve to death.
This problem is compounded by the mother butterfly, carrying a heavy load of eggs, only able to fly a hundred metres – long haul migration is not an option. Some summers, when the weather is just right, she can have a second clutch and, with a strong tail wind, might manage a thousand metres. Apart from being fussy eaters and poor fliers they are the unique host to a particular type of parasitic wasp. The odds seem stacked against them.
We scoured several acres of the site and counted 11 webs, each with about 20 caterpillars. Some were resting, while others wriggled in the sun, maybe weaving more onto their web. All seems well in this colony, at least for the time being. 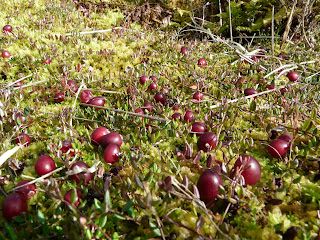 The marsh is home to bulbous spiders, big hairy caterpillars, bright stripey ones, crickets, voles galore and by extrapolation, to shrews. There were masses of cranberries, their name in Welsh ‘llyg aeron’, which translates to shrew berries.
Beacons of red, resting on mounds of moss, with leaves like thyme, easy to see, easy to pick. I picked a pocketful, boiled with sugar and a bit of water and my sauce is in the freezer. As I eat my turkey on Christmas Day I’ll think back to the pingo and everything that grows there.
YouTube of the caterpillars and the cranberries
Posted by Huw Jenkins at 08:47 No comments:

A Plea to the Marsh Fritillaries of Wales 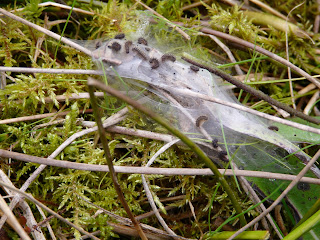 Life is precarious. Starting as a clutch of a few hundred eggs, mother marsh fritillary has laid you down on devil’s-bit scabious. When you hatch you are going to love this plant. In fact it’s the only thing you can eat, you are a very fussy eater. Your relatives in Europe eat honeysuckle but you won’t touch the stuff. 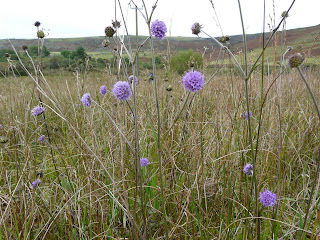 By late August, with the help of your surviving caterpillar brothers and sisters, you will have built a web low down in the base of the plant. On a sunny day, this makes a great bed to lounge on and admire the tall purple pom-poms and visiting bees while your plant is in flower.  In cold spells it’s best to climb down and huddle together beneath the tussocks.
With luck the marshy ground you live in will be grazed by cattle or ponies and not by sheep – they too are fussy with their food and will eat you out of house and home.
A large gang of caterpillars can soon demolish the leaves of a single plant and need to move on to the next one, preferably not too far away. Sometimes caterpillars are so prolific they eat the whole colony into extinction.
If you make it through winter into spring you will metamorphose into a pupa and emerge as a butterfly in early summer. Females are jumped on and mated immediately.
Your mother was not a strong flier to begin with and, laden down with so many eggs, her maximum range would be a hundred metres. This is why it is so difficult for marsh fritillaries to emigrate, you can only go in short hops, no question of a long haul to a landing field full of devil’s-bit scabious.
If weather conditions permit, your mother might have a second clutch of eggs – being a bit lighter, and with a tail wind, maybe she could manage a thousand metres?
You marsh fritillaries are a bit of a specialist that thrived on the back of a way of farming that is no longer in vogue. I’ll do what I can to help, by finding and protecting new sites, but the prospects are not good unless you can stop being so fussy with your food.
One theory is that you don’t eat honeysuckle because it’s too cold. Maybe you will be a winner from climate change.
Huw
1st October 2010
Posted by Huw Jenkins at 07:30 No comments: