I was walking through the drizzly woods, enjoying fresh bilberries, Molly scouting ahead. A squirrel ran up an old oak, and while Molly gazed upwards, front paws on the trunk, a second squirrel sneaked up the far side and into a hole half way up the tree. A couple of minutes later its head popped out to check the coast was clear and it carried on to the top.

I wonder what went on inside. Did the squirrel attack the bats? Did the bats mob the squirrel? Why were some of the bats so slow to leave the roost? I’ll never know, but it was a great encounter.

A friend suggests the bats were probably Noctules.
Posted by Unknown at 08:04 No comments: 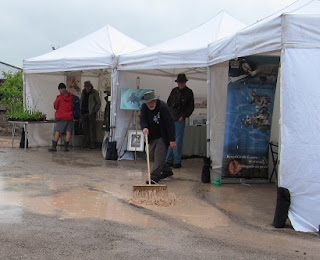 Natur Cymru had a stall at RSPB Conwy’s 20-year celebrations this last weekend. Saturday was a lovely day with plenty of visitors, Iolo Williams was there to launch the event and cut the birthday cake etc, BTO people ran a bird ringing demonstration and lots of other things were happening. Over the two days, we recruited five new subscribers for Natur Cymru and made a number of useful contacts (including potential authors and a cover artist).

Sunday was rather different, it started raining about 8am and continued all morning.  These photos were taken by Viv Finn who was on the Bywyd Gwyllt Glaslyn Wildlife stand. One shows Guiseppe Bocatto from North Wales Wildlife Trust, keeping the water at bay. The yellow duck is obviously appreciating the fact that RSPB Conwy is indeed a wetland reserve! Congratulations to the RSPB staff and volunteers, and assorted stallholders, who remained cheerful throughout and coped well with the conditions. 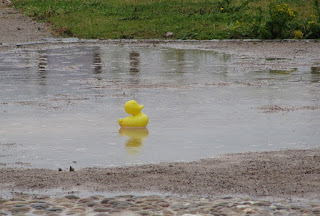 Wild flowers come and go, mainly in the early part of the summer, but my mix from Pictorial Meadows just keeps on coming. It should still be blooming up till the first frost in November. 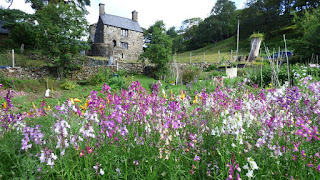 I seeded six sections of the veg patch at different times and with varying success. A length on rich soil behind a row of peas was the first to get going, it took off really fast. Was that because it was on a slight slope, angled away from the sun, and did that mean they didn’t go too thirsty?

Other sowings thrived but some were patchy. Seedlings close to stone walls and compost heaps were probably most vulnerable to slug attack. In some areas a mix of seedlings sprouted but only a couple of species went on to survive. Was that because the slugs didn’t like them? Areas that were initially devastated by slugs are still pushing up tiny seedlings and these look like they might survive. Are the slugs sick of the plants?

The seeds had to cope with initial drought and my sporadic watering through a hosepipe from the stream above. They were then hit bit exceedingly heavy rains and pools of long standing water.

The supplier stressed the need for weed free beds, which they were when I sowed the seeds. But other seeds have been trespassing or rising out of the seedbank. So what I thought was going to be a low input project has turned into an obsessive, time consuming but satisfying labour of love. Next year I might plant narrower beds so that I can reach across and weed. With the current set up I need to use a scaffolding plank resting on stools – lying face down in a flower bed causes the occasional passer-by to ask if all is ok.

It was the new head gardener at Bodnant who gave me the idea. He had a border on one of those immaculate terraces which was plagued with a particularly pernicious weed; by sowing a mix of annual seeds he’d be able to inspire the visitors and keep the weeds in check ready for planting perennials next year.

If you’d like to have a go you should visit the Pictorial Meadows website. I got a bit carried away with ordering seeds and opted for 500g at a cost of just over £150. I chose the original Pictorial Meadows mix which is said to produce stunning displays until late October / November, starting out with white, blues, pinks and reds, turning to reds, orange and yellow in the autumn. The mix has been carefully balanced for colour and succession of display. Components include: Shirley Poppy, Pavader Rhoeas Californian Poppy, Eschscholzia Californica Cornflower, Centaurea Cyanus Fairy Toadflax, Linaria Maroccana Tickseed Coreopsis Tinctorial Red Orache Atriplex Hortensis and Larkspur. Delphinium Ajacis General Height: 60cm.

So far it’s done what it says it will do on the packet which is not always the case with my gardening attempts! Should I collect the seed at the end of the summer or buy more for next year? Needless to say the supplier strongly recommends buying new so that you get the mix in the right proportions.

Photos struggle to convey the effect, the swaying in the breeze and the buzz of the bees. This YouTube is better but still a poor substitute for the real thing.

I picked a colander full of broad beans, took them to the kitchen and discovered I’d also picked up a couple of copulating hitchhikers - green shield bugs.

They mate back to back as they’re not flexible enough for both to face forward. Or maybe they can't stand the sight of each other?

During their journey to the kitchen and back to the beans they remained attached, the larger one, the female, walking forwards up my arm and the male having to walk backwards.