For Fathers Day my son took me out on a mountain ramble up and around Y Garn. It was beautiful to see so many and such variety of plants in flower including the Snowdon Lily which I thought would have been just a stalk by 19th June. See how many you recognise:
Posted by Unknown at 07:15 No comments:

50 years ago there were 14 boats fishing for lobsters off Barmouth and, not surprisingly, the population declined. At that concentration it just wasn’t sustainable. Today there’s just the one, skippered by John Johnson, the man who also runs fishing charters on Viking II and supplies tackle from his shop on the high street.
He welcomed me on board to see how, with the help of veteran lobsterman Ray Lewis, he goes about his business. I was lucky to be motoring out of harbour with still water and blue skies – frequent high winds had meant slim pickings for most of May and June.

About a mile out we reached and hooked a marker buoy and winched up a string of 12 pots. 1, 2 and 3 were lobsterless, temporary home to small fish, crabs and jellyfish eggs. Pot number 4 produced the first lobster.
Like a production line, each pot was opened, emptied and baited with a chunk of plaice then stacked in sequence on a bench ready for launching off the stern. Maybe 15 minutes to raise and relay the dozen.
Some pots were empty whilst others were crammed full of life, not just lobsters but edible crabs, spiders, hermits, velvets, butterfish, blennies and whelks to name but a few. The Fisheries ruler was used to measure the length of the lobster’s main shell from eye-socket to the start of the thorax. Any less than 87 mm were returned to the sea, about 75%, and many of these were so frustratingly borderline.

After about 3 hours we had 36 decent sized lobsters in the oxygenated tank with their claws held fast by strong rubber bands. Not for fear of humans being bitten but to limit the injuries they would inflict on each other. Some were so brilliant blue whilst others had more of an orange tinge – the difference between those that blend into a background of rock as opposed to shale.
John’s mobile rang and 18 were sold to the Lobster Pond (01341 281234), the quayside shop for live or cooked lobsters. The other 18 would be buried beneath the waves in one of his chests, ready for the dealer from Bangor who sources up the coastline from mid Wales. From Bangor they go to Spain where lobsters reach respectable prices.
Before returning to port John switched to fishing prawns in a similar fashion. A string of tubular prawn pots baited with ripe herring. 4 or 5 kilos were harvested and secured in the submarine stash.
Back ashore, slightly lobster pink despite my factor 30 sunblock, I had much more respect for this noble crustacean. For summer occasions and anniversaries there’s nothing quite like a fresh lobster from Barmouth caught by John or Ray. So much better than supermarket lobsters from Canada.
Posted by Unknown at 07:07 No comments:

200 years ago in the summer of 1811 William Madocks completed the Cob. Hopelessly over budget and in serious debt. But he did it.

In the winter edition of Natur Cymru there was a great article by Twm Elias about the Glaslyn Marsh and the impact of the Cob. If your Welsh was not good enough to fully understand it and you did not request a translation - here it is. Well worth the read. Diolch Twm.

An Appointment with the Doctor

Town centre location, short walk from bus stop, café just round the corner – sounds like a good location for a surgery. This surgery is in the heart of a delightful small town in the Vale of Glamorgan.

The ‘surgery’ is something rather special as it contains a range of medicinal plants which would have been used by the local population before 1800. We forget that, except for the last 75 years, we humans have relied almost entirely on plants to treat all manner of sickness, from coughs to TB and malaria; even today we rely on the curative properties of plants in over 50% of our medicines. Elsewhere in the world, people still rely on herbs as a primary source of medicine 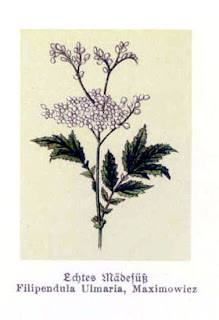 There are 12 beds in the Cowbridge Physic Garden, each one relating to parts of the body or to a medical condition. Bed 9 contains plants for the liver, bed 2 the eyes, bed 4 the nerves, bed 10 infectious diseases and so on. Work on the Garden has transformed a derelict site into a place where passers-by pop in to relax and meet friends and into a very special place with history, beauty and a strong reminder of ‘what biodiversity does for us’!

Work began in 2005 to transform the half acre space, now maintained by an enthusiastic band of volunteers linked to the Welsh Historic Gardens Trust. They are only too happy to show you round and explain their story and that of our reliance on nature.

Nuts - who ate the nuts?

At this time of year the nut feeders empty fast. Experimenting with a time lapse camera the 720 images, taken every 2 minutes over 24 daylight hours, tell the story. A couple of the creatures have bushy tails instead of wings. Here it is:

Cemlyn is the place to visit now, better than oakwoods as the bluebells are over and the pied flycatchers have fledged and left the area (the Springwatch ones that died were late broods, the ones in the main nesting period did much better).

Visit Cemlyn to see Sandwich terns flying low over your head to feed their chicks a few yards away, each adult with one sandeel, sprat or young cod in its beak. 1600 pairs make a grand spectacle and it's the only colony in Wales! The NWWT wardens will point out the less numerous common and arctic terns, also the pair of Mediterranean gulls whose eggs have now hatched.

Go any day, or join one of the guided walks (Tuesday & Sunday 2pm up to the end of July).
No charge for visiting or for the walks, but a donation in the NWWT box would be welcome.

Directions are on the NWWT website. The easiest is the A55 route, turn off for Valley (NOT the RAF camp) and at the traffic lights in Valley turn right onto the A5025. After 9 miles, turn left (signed to Jam Factory & Cemlyn). Pass the Jam place, 1km further on keep left until you see the lagoon, then right for the car park.

I'd hoped to include Huw's UTube clip of film from 2010 but he'll have to add that.

Woodpeckers in the Woods – a week later

Walking past there was quite a commotion coming from the woodpecker nest, louder and more insistent than usual. Was this the father insisting the chick took its maiden flight? It was having none of it. Certainly not in the rain.

Meanwhile another young chick overshot the nut feeder and crashed into our kitchen window. Dazed and confused it eventually flew off.

Over the past year we have made 16 films to help the Welsh Assembly Government illustrate different ecosystems. What are they? Why are they important to us?

The contributors have all been front line workers, as opposed to media savvy presenters, which makes the films that much more real. You are hearing it from the horses' mouths and without a script. We didn't always have picture postcard weather!

If you would like help in communicating a story, please get in contact. Below is a list of films, some of which were grant funded by CCW (thank you!). 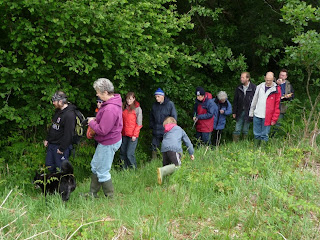 A Bioblitz is definitely a core activity for Natur Cymru readers, as it’s a concentrated effort over a day to find and identify as many plants and animals as possible on a specific site. Usually experts are drafted in and beginners are encouraged to come along and learn/help. So it should be a fun activity as well as generating lots of records.
Anyway, I went along to Ty Hwll (the Ugly House) on the A5 near Capel Curig for the Snowdonia Society’s Bioblitz on May 20th. My contribution was supposed to be an Owl Walk at dusk; what I actually did was to inspect all the nestboxes in the grounds, accompanied by two ‘beginners’ who had never seen inside a box before! They were delighted to see nests of blue & great tits, pied flycatchers and even a nuthatch nest. After this was over, the bat team were setting up a harp trap (for bats) and switching on their sophisticated bat detectors.
Thirty-six hours later I was on the outskirts of Bangor at my second Bioblitz, held at Eithinog, a 33-acre area of old fields and hedges near Ysgol Friars. The site has recently become an SSSI on account of its grassland fungi, and Gwynedd Council is about to hand it over to North Wales Wildlife Trust. Despite strong winds and heavy showers, nearly all events were well-attended, including a Wild Flower Walk led by our Editor and his wife Joanna (see photo!). Roy Tapping from COFNOD (Local Records Centre) popped in several times to collect records as the groups returned to base. Although Eithinog’s wildlife is unusually well-documented, species will die out and others arrive, so listing must continue indefinitely. At present the site is effectively a Public Open Space. Future management may be more pro-active, but hopefully there will be no shortage of naturalists (from experts to beginners) to continue the programme.
Posted by Geoff Gibbs at 21:50 No comments:

Pigeons might be common elsewhere but it’s a rare sight that we find them perched on our roof. I could see they both had rings. Two of them hung around for most of Saturday, barely moving, soaking up the sunshine. One moved on and the other seemed to be dozing on top of a chimney.

We consulted the racing pigeon website and followed their guide on what to do if you find a stray racing pigeon. The advice in our case was to provide food and water. Sue clambered out of a bedroom window to scatter the corn and place the bowl. That was enough for the pigeon .... he or she was off.
Where were they racing to and from? There were only 106 races listed for the 4th June on the racing pigeon website!
Posted by Unknown at 10:38 No comments:

Woodpeckers in the Woods

Not the flash of bright colours but the whimpering of hungry chicks, that’s what gave away the nest, about 15 feet up an oak. Precision drilled to fit woodpeckers. I waited a couple of minutes until the parents flew in, first one, then the other delivered the food parcels. Within 5 minutes they were back again. It’s a never ending shuttle at the moment.

It was great to mix with the good and the great at this year’s Hay Festival. What a wonderful setting for the Inspired by Nature prize-giving ceremony.

Thanks to RSPB Cymru for inviting us into their tent and to WWF Cymru and Tŷ Newydd for sponsoring the competition prizes. To all the competitors, the winners, the judges and Gillian Clarke for presenting the prizes. 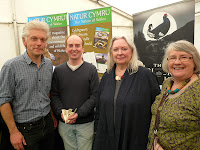 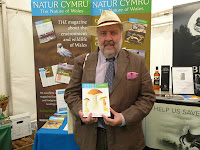 Thanks also to BBC Radio Wales for featuring us on the Jamie and Louise programme and the Roy Noble Show. Roy called in to see us .... I think he’d heard about the cake which was the star of the show! 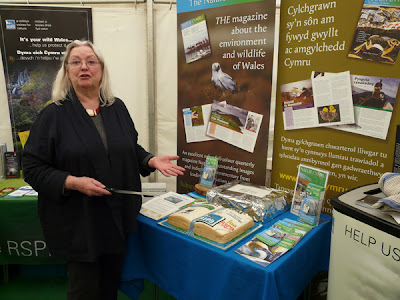