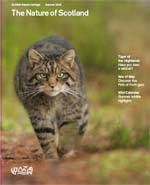 In summer 2008 I subscribed to the Nature of Scotland magazine, published by Scottish Natural Heritage. It was a beautifully laid out, 68-page, quarterly magazine distributed free of charge to anyone who requested it and I believe over 30,000 copies of each edition were printed.

I reckoned the costs of producing and distributing the Nature of Scotland must have been in excess of £100,000 a year and maybe much more. As someone who was trying to recruit paying subscribers to the Nature of Wales magazine, Natur Cymru, I felt a bit envious; the amount of subsidy received by Natur Cymru was peanuts compared to the subsidy in Scotland.

But would it be sustainable? After a few years the quarterly frequency dropped to half yearly. Then there was a phase in which the online PDF version was promoted and the doors were closed to new subscribers of the printed edition. 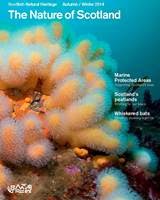 And today I received a postcard saying that the printed magazine would no longer be posted to individual addresses with effect from October 2014. I never did get to feel edition 20 but you can read it online here or even listen to an audio version.

The end of the printed magazine is a shame but a commercial necessity masquerading as reduced carbon footprint. On the other hand Natur Cymru is on the brink of printing edition 53; an achievement made possible by a loyal set of paying subscribers, some advertising, some subsidy and some excellent volunteers. Keep up the good work! As much as I like the online world I think there is still a vital role for the printed word in pushing messages and reaching out.

NB gift subscriptions as Christmas presents are a great idea and help keep the show on the road!
Posted by Unknown at 17:42 No comments:

Technology moving on in the way that it does, Natur Cymru has acquired a new phone number, which is:

In case you're worried it might cost you a fortune, 03 numbers are charged at the same rate as standard calls to STD codes beginning 01 and 02. There's more information on the Ofcom website:

Remember, the office is only staffed part time so please leave a message if there's no one there, or email us on info@naturcymru.org.uk
Posted by Anonymous at 17:30 No comments:

If you go down to the ancient woodlands today ....

Dolmelynllyn is for lovers of the lower plants. The ancient woodlands around Dolmelynllyn are a Mecca for lichens, liverworts and mosses; the so-called ‘lower plants’. Students travel hundreds of miles to see the rare specimens, just a few miles north of Dolgellau, many of which have disappeared elsewhere a long time ago.

The magic formula is an abundance of rain, the temperate Celtic rainforest, fresh air and sensible management by the National Trust with help from Plantlife and Natural Resources Wales.

Rhodri Wigley, the lead ranger for the National Trust at Dolmelynllyn, and Dave Lamacraft, from Plantlife Cymru, explain what’s so special and how they care for it.

Mushrooms and other fungi brighten up the garden

The vegetable garden is still looking relatively good; cosmos blooms are just about hanging on, nasturtiums are brighter than ever, lots of tall yellow flowers have grown from the green manure mix. Autumn-sown broad beans, onions and garlic are all putting on lots of new growth.

But mushrooms are the stars of the show and there’s a profusion at the base of the dead sycamore tree. I didn't know what they were but have since been told they are honey fungus. Beneath the bark there is a mass of winding black bootlaces which I had always referred to as honey fungus but they are part of the same organism.

On the front lawn are many different kinds of waxcaps plus two strange-looking types of club fungus.


At first I thought the black one was ‘dead man’s fingers’ but my ID guide says they grow on wood. These are growing on grass so are a type of ‘earth tongue’ – although having said that, they might be growing out of a dead tree-root beneath the grass? Complicated stuff this natural history. Next to the black is a bright yellow one.

The earth tongues and the club fungus have faded, but are still hanging around, whereas the honey fungus is a strong-smelling and very slippery pile of mush at the base of the tree. The person who kindly told me the names of the above said that it was tantalising that I had mentioned many different kinds of waxcaps, but without saying which ones. These are photos of the four I was able to find today. 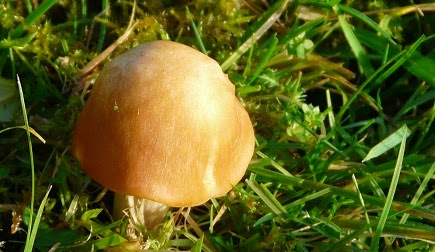 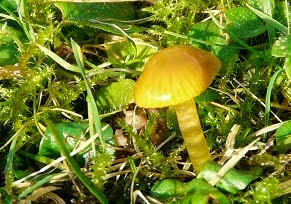 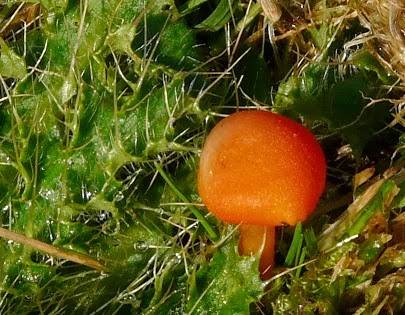 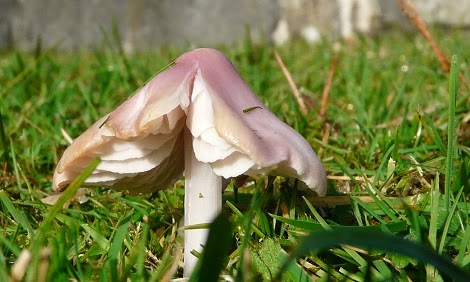