Why are some Elephant Hawkmoth larvae green and others black?

Gardening can be hot, sweaty and boringly repetitive, especially when weeding, but every now and then something magical crops up.

Today’s discovery was an unusual caterpillar or larva which I’d never seen before. But I was surprised when someone replied to my Tweet that it was the larva of an elephant hawkmoth – I’d seen one of those before and it was bright green.

How come the larvae of the elephant hawkmoth can be such different colours? Both share the huge ‘eyes’ and trunk like proboscis.
Posted by Unknown at 20:18 1 comment: 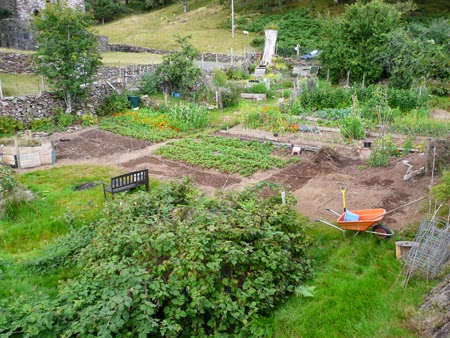 Our veg patch is big and previous, over-ambitious plans to cultivate the lot have failed. Clearing thickly matted couch grass with reeds and bracken is hard graft, as testified by broken fork; a top of the range Wilkinson Sword with wooden handle. It must have cost £35 just a year ago but sadly the handle was not designed for replacing. I’ll look out for something more enduring but in the meantime have succumbed to a £5 job from Wilkinson, not the Sword people.

Sustainable gains is what I’m looking for. The turf, weeds and excess strawberry plants have been lifted into a rectangular cage of fencing wire, with its walls lined with cardboard to limit the light; hopefully this will biodegrade at the point that the weeds have become great compost.

Clear soil is an open invitation for weeds but I’ve got there first and sown a green manure mix of Crimson Clover, Mustard, Red Clover and Italian Rye-Grass. If it does what it says on the label, this winter mix will fix nitrogen, suppress weeds, dredge up minerals, improve moisture retention and soil structure. All I need to do in January is cut it down and dig it into the soil or leave it as a mulch for the worms to drag down. And then we need to plant something else and are thinking of a wild flower mix to see if we can get even more bees and butterflies.

There’s still a lot more grass at the bottom of the garden and the plan here is to cut it short, remove the cuttings, and sow Yellow Rattle in September or October; it needs winter weather to germinate in spring. It’s a semi-parasitic, grassland annual which weakens grasses, creates gaps for wild flowers when it dies back, reduces the need for mowing and is called ‘rattle’ because that’s what its seeds do when ripe and dry. We will also be using rattle in the big garden to convert areas of lawn into flower meadows.

If all goes to plan there will be less grass, less mowing, less petrol and more time to enjoy wild flowers with their circus of bees and butterflies.
Posted by Unknown at 07:41 No comments: 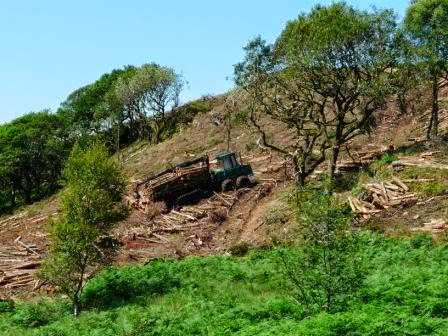 Our original plan had been to kayak the Dwyryd down to Borth y Gest but the tides were no good. Instead we went up Moelwyn Bach and as we looked down to Portmeirion it looked as if someone had pulled the plug.

The view on the lower slopes has changed a lot with the removal of the Phytophthora infected larch now almost complete. It’s good to see the occasional oak that for so many years has been hidden in amongst the conifers.

Everywhere is very dry but the mountain still has plenty of wet spots. At one stage we were walking along a shallow stream being patrolled by a Golden Ring, presumably looking for a mate. It latched onto my walking stick and was very reluctant to let go; I think I was being given the evil eye and told to get off his patch.

The beauty of going up is that the cooling breeze gets stronger and soon you’re above the bracken line and into the bilberries – there’s a bumper crop. Pop a hot, sun-warmed berry into your mouth and it explodes with flavour.

Now that Haydn is a geology student we are trying to be a bit more purposeful in our walks and took with us the brightly coloured geological map of Snowdonia. Our local mountain has so much variety which is evident from the many bands of colour on the map that need to be crossed to get to the summit; it’s also evident simply looking at the rocks themselves. Exotic sounding Breccia is my firm favourite.

Birds were keeping a low profile in the hot sun but butterflies were out in force, lots and lots of Small Heath. Also loads of little white butterflies (or moths?) – must take a closer look next time. Bog Asphodel was striking and so too the Sundew. Towards the top I noticed a compact plant that I now know is called Alpine Clubmoss. A perfect day. 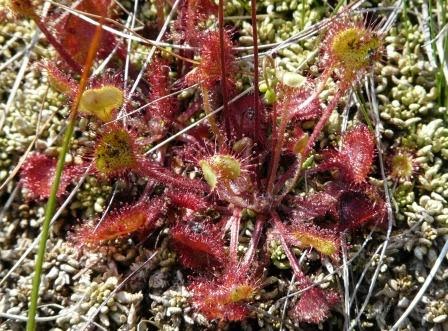 Dare I say there’s a buzz at Tŷ Hyll? I love this photo of a proud beekeeper with ten virgin queens in ‘hair curlers’ which protect the queens from attack by a rival; the first new queen to hatch in any colony will kill potential competitors as soon as they emerge.

All ten of these virgin queens have now been placed in the Ugly House woodland in separate apideas (mini hives) along with a cupful of fondant and some young worker bees. After a couple of days the virgin queen in each apidea will have been accepted by the workers and can be released from the hair curler.

The virgin queens will be sniffing out the pheromones of the resident, roving drones at Tŷ Hyll and all being well, mating will take place in the next week or so. Each mated queen can go on to produce over a million bees during her life without the need to mate again – amazing!

If you’ve not yet been to the Ugly House (Tŷ Hyll) it is two miles out of Betws y Coed on the way to Capel Curig with an olde worlde tearoom, beautiful wildlife garden with five acres of idyllic woodland and enthusiastic beekeepers. More details at www.theuglyhouse.co.uk

For logistical reasons (Sherpa buses) our Paul Gannon geology walk starting at Pen y Pass was switched to the foothills of Snowdon, just above Llanberis. I’d done this walk with Paul a couple of years ago and had only half understood what was said so was hoping to get the other half of the story.

The weather was fine but hardly tropical as I tried to come to terms with the explanation of tectonic plates and that the spot we were standing on had been beneath the equator about 600 million years ago.

If I’ve got it right our rocks were created by underwater volcanoes, when our continental plate collided with an oceanic plate, but the mountains followed much later when our continent collided with another continent. An oceanic plate is denser than a continental, so when they collide the denser one goes beneath and this is called subduction. But when two continents collide they buckle, fold and squeeze the rocks into the mountains.

Our mountains emerged about 400 million years ago and were about the height of the Alps, but have been shrinking ever since.  The Alps are much younger, a mere 30 million years, and are still growing, but eventually erosion and weathering will bring them down to size. For the next few thousand years Snowdonia will stand still; rising spring-like since the melting of the glaciers but eroding by a similar amount.

Our rocks are mainly from the Cambrian era, about 450 million years ago, but lying in the footpath was a gneiss rock from a much earlier era - how did that get there? Either by glacier from Anglesey or imported rock for footpath maintenance.

Paul explained the three types of rock, volcanic (or igneous), sedimentary and metamorphic, but we would be concentrating on sedimentary. The three types of sedimentary rock are called mudstone, siltstone and sandstone with the names referring not to the chemical composition but the particle size with sand being the largest and mud the smallest.

From here we were shown an example of graded bedding, layers of sediment with the larger particles sinking towards the bottom of each layer, and could see the angle at which the rocks had been buckled and bent.

Looking down steeply onto Nant Peris we were next to a fantastic example of tension gashes. These sandstone rocks had been horizontal in the sedimentary phase but during the mountain building phase had been put under huge amounts of tension and bent upwards. Cold rocks would be ‘brittle’ and shatter but hot rocks, 10 to 15 kilometres beneath the surface, would be more malleable or ‘plastic’.  We were presumably looking at sandstone coming from the crossroads of that zone with brittle deformations at one end and plastic deformations at the other.

Along the way I began to feel more comfortable with the geology beneath my feet, it started to make sense and I thought yes, you’ve almost cracked this subject. From ignorance to a little bit of knowledge with tentative understanding and then despair as I realised the enormity of how much more there is to learn. Maybe it will all become clearer if I buy the revised 2nd edition of Paul’s book The Rock Trails of Snowdonia?  Maybe Paul could take me on this walk for a 3rd time?

Thanks very much to Paul for donating his time and to the Snowdonia Society for organising this geology walk. Write ups of previous geology walks are here and here. 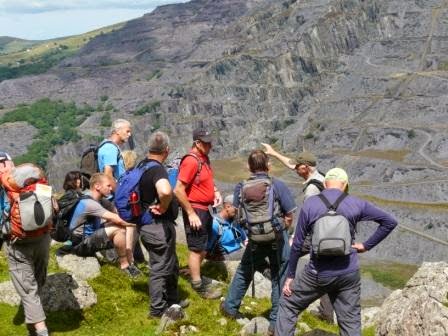